The Diablos with lead singer Nolan Strong was one of Detroit’s most successful early vocal groups. The group’s classic 1954 recording of “The Wind” would have probably been a national R&B hit were it not for the spotty distribution of the tiny Fortune label. 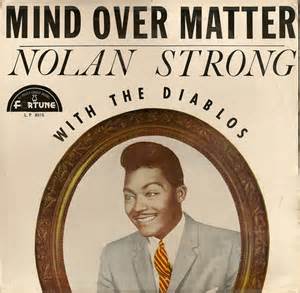 According to author David A. Carson, “In 1962 Fortune owner Devora Brown wrote a song expressly for Nolan Strong. Although only his name appeared on the label, the Diablos backed him up. ‘Mind Over Matter’ was an irresistible midtempo dance record full of sudden stops, starts, and vocal acrobatics, as Nolan sang about putting a hex on his girl to win her love.”

“Mind Over Matter” quickly shot to # 1 on the Detroit charts. Sheldon Brown, Devora’s son, remembered that Berry Gordy was not pleased with Fortune suddenly having a # 1 record in his backyard. “Berry Gordy thought it was such a great record that he took the guys in the Temptations and they recorded a version of ‘Mind Over Matter’ as the Pirates for Motown, but Nolan Strong had the bigger hit.”