The Rock and Roll Trio (John Len, Ron Witucki, and yours truly) decided to take on the songs of Michigan Rock and Roll Legend Del Shannon at our latest get-together. We agreed at a previous meeting to narrow down our favorite Shannon songs to a list of 25. This was probably a little more difficult for John and me to pick just 25, since I think I can safely say we are both major Del Shannon fans.

When we met, each song was given points according to where we placed it on our lists. The # 1 song on our lists got 25 points, the # 2 song 24, and so on. If a song appeared on two of our lists, it got a 3 point bonus. If it appeared on all three lists, the bonus was 5 points. The totals were tabulated, and we ranked the songs according to the highest number of points. 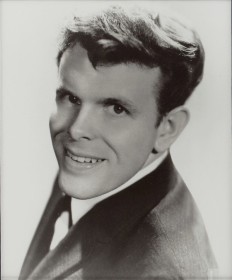 Del Shannon was the first great Rock and Roller from West Michigan. He grew up in Coopersville, a small town west of Grand Rapids. Del charted 17 singles over a recording career that lasted almost thirty years. Shannon was an important influence for The Beatles and a host of other British Invasion bands. He also has the distinction of being the first artist to chart with a Lennon-McCartney composition in the United States. Del was inducted into the Rock and Roll Hall of Fame in 1999, and he was among the first group of artists who were voted Michigan Rock and Roll Legends in 2005. In addition, three of his recordings have been voted Legendary Michigan Songs.

Our goal was to select the Top 12 Del Shannon songs, but because of ties in the point totals we ended up with 15 – hence the weird title “baker’s dozen”. You have to look at the point totals behind each song title to see the ties since I wasn’t skilled enough to get the computer to list two # 3’s etc.

01.)“Runaway” – 80 pts. This unanimous selection is probably no surprise to anyone. “Runaway” is one of the all-time great early Rock and Roll songs. It was Billboard’s Song of the Year in 1961, and it was voted the # 1 Legendary Michigan Song by a wide margin. This is simply an epic recording that still sounds glorious 50 years later.

02.)“Handy Man” – 68 pts. Del was very good at doing cover versions and “Handy Man” is the best of the bunch. He completely takes over the song and makes it his own.  The Jimmy Jones original was a very enjoyable recording in it is own right, but Shannon takes it to another level. Detroit’s Royaltones played behind Del on this terrific single.

03.)“Little Town Flirt” – 64 pts. Shannon used the Young Sisters from Detroit as the backing singers on this big hit from 1963. Del was really adept at singing this type of mid-tempo song. Shannon co-wrote it with Maron McKenzie, a staff writer for Big Top, Del’s record label. It was a bigger hit in England than in the U.S., and is often cited as an important inspiration for the British Invasion bands.

04.)“Hats Off To Larry” – 64 pts.  Del’s follow-up to “Runaway” was his second-highest charting single in the United States. In typical early Rock and Roll fashion, it is similar to his preceding hit.  But “Hats Off To Larry” is superlative in every way with Shannon’s marvelous vocal and great instrumentation throughout.

05.)“Two Kinds Of Teardrops” – 56 pts. The tune was also written with Maron McKenzie and was probably a little too much like “Little Town Flirt” in both tempo and sound to follow its predecessor into the Top 20 in the U.S. It’s still an impressive song, however, and it was a much bigger hit in England, reaching #5 on the British Pop Chart.

06.)“So Long Baby” – 52 pts. How many fabulous Rock and Roll songs have had a kazoo solo?  I can think of only one, Del Shannon’s “So Long Baby”. The kazoo was the first instrument that Del learned to play when he was growing up in Coopersville. This 45 was in continuous rotation on my record player when I was in high school.

07.)“Sea Of Love” – 49 pts. My favorite Del Shannon cover versions are the ones where he changes the arrangement in some way, and doing so, turns it into a “Del Shannon song”. Shannon fan Tom Petty produced Del’s “Drop Down And Get Me” album, and Shannon’s classic cover of “Sea Of Love” was the hit single released from it. Backed by Petty and his crack band, The Heartbreakers, this was Del’s last charting record in early 1982.

08.)“Keep Searchin’ (We’ll Follow the Sun)” – 48 pts. This killer tune returned Del Shannon to the Top Ten for the first time in four years when it peaked at # 9 in early 1965. This might be the closest Del ever came to recapturing the mojo he had when he wrote and performed “Runaway” in 1961.

10.)“Walk Away” – 41 pts. This outstanding cut was Del’s final single.  I simply don’t understand why this wasn’t a big comeback hit for him.  Jeff Lynne produced it along with the rest of “Rock On” and you can really hear his influence on this song.  They seemed like they made an excellent team, and it’s too bad that Lynne and Shannon didn’t get a chance to work together again.

11.)“Cry Myself To Sleep” – 40 pts. How it was not a major hit when the 45 was first released in 1962, still amazes me. This is one of my all-time favorite Del Shannon songs. “Cry Myself To Sleep” has catchy hooks, a fantastic lead vocal from Del, and some tasty falsetto parts; yet it only reached # 99 on the Hot 100. Someone was listening in England, however. Elton John also loved “Cry Myself to Sleep” and used it as inspiration for “Crocodile Rock”, which became a # 1 hit in the U.S. ten years after “Cry Myself To Sleep” achieved only flop status.

12.)“Let’s Dance” – 40 pts. This is the one song on our list that I just can’t agree with. Ron and John both rated it highly and praised its Cajun influence, but I thought it was one of the lesser songs from Del’s “Rock On” album. In my opinion, Shannon’s fab cover of The Tams’ “What Kind Of Fool Do You Think I Am” from the same album would have been a much better choice.

13.)“From Me To You” – 30 pts. I thought it was pretty cool that Del Shannon recorded this song in 1963 when literally no one in the United States had ever heard of The Beatles. He did a nice cover of their third British single, but he might have had more success in the U.S. if he had recorded “Please Please Me” instead.

14.)“Stranger In Town” – 30 pts. This was one of the three Top 40 hits Del enjoyed during the height of “Beatlemania”.  Shannon wrote the somewhat paranoid “Stranger In Town”, and performed it on television wearing a trench coat (adopting the James Bond look?) on both Shindig and Hullabaloo, the prime time Rock and Roll shows of 1965.

15.)“Show Me” – 27 pts. This one of the great lost songs from Del’s stint on Liberty Records. He had finally broken away from the management team in Detroit that had been screwing him over for years, and he moved his family from Michigan to Los Angeles. Unfortunately, the hits would dry up following the move despite the fact that he was still writing and recording songs like “Show Me”, reminiscent of the classics he composed while still a Michigander.