Artist Name: The Ones
Year Inducted: 2017

The Ones were formed in Lansing and are best remembered for their dynamic lead singer and guitarist, Danny Hernandez. Described as a Hispanic James Brown, Hernandez was an outstanding showman who helped make the band one of Lansing’s biggest sensations in the late 1960’s. 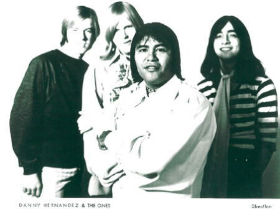 The band’s great ballad, “You Haven’t Seen My Love”, was written by Hernandez and keyboard player Kerry Nicholoff and recorded in 1967 at Dave Kalmbach’s Great Lakes Recording Studio in Sparta, Michigan. Bob Baldori of the Woolies produced the session, and Nicholoff credits him with instilling the concept of dynamics into the Ones’ recording that made “You Haven’t Seen My Love” literally jump out of the radio.

The record was issued on the Woolies’ Spirit label and also on Kalmbach’s Fenton Records and was a big local hit, reaching # 1 on Lansing radio stations. The record was then picked up by Motown Records for national distribution, making it the first single the company ever issued by a non-Motown produced act and Baldori the first independent producer used by the storied Detroit label.

Unfortunately, “You Haven’t Seen My Love” got lost in the blizzard of Motown releases in late 1967 and failed to reach the Hot 100, peaking at # 117.