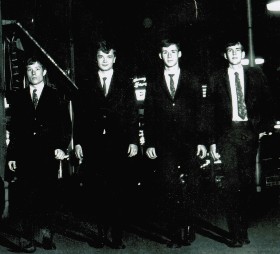 The band’s new single appeared to possess the potential to exceed the popularity of the Quests' debut, “Scream Loud,” which had reached #2 on the local radio station charts, but because of controversy “Shadows In The Night’s” potential was never realized.

The single's B-side, “I'm Tempted,” was protested by parents who were concerned with the song's alleged sexual content. Because of “I’m Tempted,” the 45 was subsequently barred from further radio play, and “Shadows In The Night” was taken off the air in Grand Rapids. Although extremely disappointing at the time, through the years “Shadows In The Night” has become an international classic, sought by collectors and appearing on many garage band compilations.