Jack Scott’s career was flying high in late 1958 with the release of his third consecutive two-sided hit single, “Goodbye Baby/Save My Soul”. Things came to a screeching halt, however, when he received an induction notice from the U. S. Army in December of that same year. 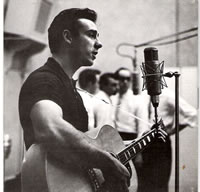 Jack with guitar and Chantones

In May of 1959, after only five months in the service, Scott was discharged from the Army on medical grounds because of a peptic ulcer. Carlton Records, which had very little material in the can when Scott went in the service, pulled “The Way I Walk” from Jack’s 1st album and released it as a single a week before his discharge.

“The Way I Walk” is a classic cut with its powerful ‘walking’ bass and menacing vocal. It is regarded by some as the last of the authentic rockabilly hits of the 50’s as softer pop sounds began to engulf the charts in the wake of the ‘Payola Scandal’.

Scott talked about “The Way I Walk” in a recent interview. “When we cut it, I’d only half-finished it, and I didn’t have all the words, just two verses."

At first, Scott complained when the song was released because he thought “The Way I Walk” needed more work. Looking back, however, he now says, “It’s kinda neat the way it is”