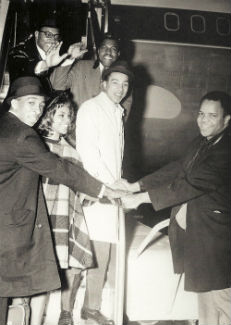 "You've Really Got A Hold On Me" was the second # 1 R&B hit for The Miracles as well as their second Top Ten Hit on the Hot 100. In 1998, it was inducted into the Grammy Hall of Fame, and it was also selected by the Rock and Roll Hall of Fame as one of the 500 Songs That Shaped Rock and Roll.

Smokey Robinson wrote the song and sings lead while second tenor Bobby Rogers is featured on harmony co-lead. "You've Really Got A Hold On Me" was originally slated to be the B-side to "Happy Landing" on the single that was released in the winter of 1962, but DJs and record buyers across the nation preferred the song on the flipside that explored the feelings of a man so in love with a woman that he can't leave her despite the fact that she treats him badly.

The song has been covered by a wide variety of artists over the years. The most famous cover was by The Beatles, who recorded "You've Really Got A Hold On Me" for "With The Beatles", their second U.K album released in 1963.