The Amboy Dukes were one of Michigan’s greatest hard rock bands of the 1960’s. They were also one of the few Detroit bands of this period to have a national hit single. The Amboy Dukes served as the launching pad for Ted Nugent, one of the most musically gifted, outspoken, and politically conservative of Michigan’s rock and rollers. The origin of the band began in Detroit, moved to Chicago, and then returned to the Motor City for fame, but not fortune.

Ted Nugent, a.k.a. the “Motor City Madman”, was born in Detroit on December 3, 1948. Ted started playing guitar at the age of nine after he’d been bitten by the rock and roll bug. His aunt, who was a stewardess, brought him a guitar with only five strings that she found on a plane and young Ted started banging away on it. 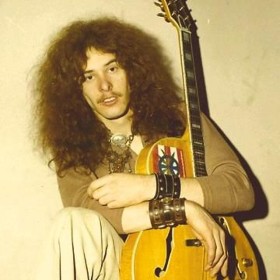 A big fan of early Elvis, James Brown, and the Ventures, Nugent put his first band together a couple of years later with drummer Tom Noel and bassist Pete Primm. The group was called the Royal High Boys. Their name was taken from a brand of shirt, called a High Boy, that all the greasers (kids that had the Elvis inspired slicked-back pompadour hairstyles) liked to wear. Ted and his band mates thought they were cool, and they wore the shirts as their stage uniforms.

By 1962, the Royal High boys had added some more members, including vocalist John Drake, and evolved into the Lourds. Nugent was the youngest member of the band, but his guitar playing was already making him the focal point of the group.

One of Ted’s early Michigan influences was Billy Lee & The Rivieras and especially their guitar player Jim McCarty. The intensity and soulfulness of the band that would later become famous as Mitch Ryder and The Detroit Wheels was a major motivation for Nugent. It might surprise some, but another of Ted’s big influences was the Rolling Stones. He has mentioned that their first album released in the U.S.A., “England’s Newest Hit Makers”, is one of his all-time favorites.

In 1964, the Lourds won a Battle of the Bands besting sixty other bands in the Detroit area. At the competition, the Lourds played covers of “High Heeled Sneakers” and “Shake A Tail Feather”, and Ted sealed the deal by jumping up on the judges’ table to play his guitar solo. The win gave the Lourds the opportunity to open a show at Cobo Hall headlined by the Supremes and the Beau Brummels. 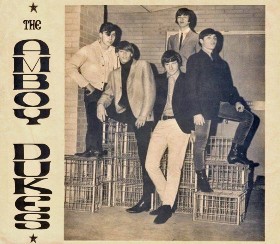 Unfortunately, Nugent’s father was transferred to Chicago shortly thereafter, meaning that Ted would have to move with his parents that summer. According to Nugent, members of the Lourds went to the moving van company and destroyed some vans in an effort to keep Ted in Detroit. Nugent’s dad was not amused, and he made Ted get a G.I. haircut and also threatened to get rid of his guitars. His dad, however, knew how much the guitars meant to Ted and how difficult the move was for him, and he let the matter slide after much blustering.

Once in Chicago, Nugent began a regimen of practicing his guitar and wasted little time before putting together a band. Ted called his group the Amboy Dukes after a defunct Detroit band that played R&B because he thought the name was cool. Nugent said that he knew nothing of the street gang from Perth Amboy, New Jersey, whose name was made famous in the title of a 1950’s novel. Ted then called John Drake, formerly of the Lourds and who had just been discharged from the army, to come to Chicago to handle the vocals.  The Amboy Dukes exploded on the scene and were soon competing with the Shadows Of Knight and the Ides Of March for the title of the city’s top band.

When Nugent graduated from high school in 1967, he contacted Bob Henkins of Detroit to be the band’s manager, and he moved the Amboy Dukes to the Motor City where he and Drake put together a new line-up that included rhythm guitarist Steve Farmer and drummer Dave Palmer.

These “new” Amboy Dukes quickly became one of the top groups in Detroit, and in 1967 they were signed to Mainstream Records. The band recorded their first album, “The Amboy Dukes” in just one night. Released in December of 1967, their debut reached # 183 on Billboard’s album charts. A scalding cover version of Them’s “Baby Please Don’t Go” was released as a single, and its propulsive beat and howling guitars raised the bar for Motor City Rock and Roll.  The Amboy Dukes' signature song  became a big Detroit hit as well as charting at # 106 nationally. 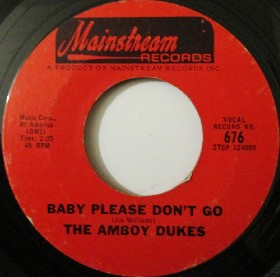 Before recording their second album, Greg Arama was brought in on bass. The band’s original material was written by Ted Nugent and Steve Farmer. It was an unusual partnership.  Farmer, who wrote the lyrics, did a lot of drugs, while Nugent, who composed the music, had never smoked a joint or cigarette and didn’t even drink. Ted was so naïve about the drug scene that it did not even occur to him that the pipe collection on the cover of their second album, “Journey To The Center Of The Mind”, might have something to do with illegal substances or that the title cut meant anything more than looking inside yourself.

Released in the summer of 1968, the single “Journey To The Center Of The Mind” helped define the psychedelic era as it peaked at # 16 on the Billboard Pop Charts. The Amboy Dukes’ follow-up single was another blast of guitar-mania called “You Talk Sunshine, I Breathe Fire”, but the record did not catch on like its predecessor and stalled at # 114. It would be the Amboy Dukes’ last charting single. 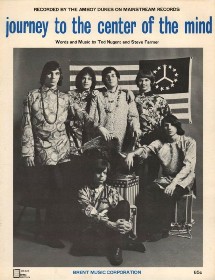 By 1969, the Amboy Dukes had undergone some major personnel changes. Nugent fired vocalist John Drake and replaced him with white soul singer Rusty Day. Day sang lead on the band’s third album “Migration” and on the singles: “Good Natured Emma/Prodigal Man” and “For His Namesake/Loaded For Bear”.

Ted has stated that the “Migration” album was his favorite Amboy Dukes LP. He loved the instrumental title cut and he felt that the songs showed that the band was progressing.  Included on the “Migration” album was an incredible cover of Frankie Lymon and The Teenagers’ “I’m Not A Juvenile Delinquent” with a flawless lead vocal by keyboardist Andy Solomon. But it was Ted who was the center of attention at Amboy Dukes’ shows displaying his characteristic guitar acrobatics and often performing in a full American Indian headdress.  Before the end of the year, however, Nugent had also fired both Rusty Day and Steve Farmer from the band because he felt that their drug use issues were hurting the Amboy Dukes.

Mainstream released “The Best Of The Original Amboy Dukes” album late in 1969, and the band then signed with Polydor Records. The Amboy Dukes recorded two albums for the label: 1970’s “Marriage On The Rocks / Rock Bottom” and 1971’s “Survival Of The Fittest / Live”. The band, however, continued to undergo personnel changes as Greg Arama left to join Dick Wagner’s new band, Ursa Major, and K. J. Knight became the Amboy Dukes’ new drummer and vocalist. 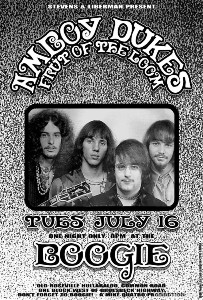 When the band signed with DiscReet Records in 1972, they became known as Ted Nugent and the Amboy Dukes. Nugent tried to boost album sales by staging a series of guitar contests against Mike Pinera of Iron Butterfly, Wayne Kramer of the MC5, and Frank Marino of Mahogany Rush, but nothing he tried seemed to work.

Ted was also developing some health issues as a result of the many hats he was forced to wear in order to keep the Amboy Dukes rolling. Nugent was acting as road manager, booking the band, maintaining the equipment, driving the truck, handling the hotels and the ledgers for the band, as well as bailing out anyone who got into trouble.

This last version of the Amboy Dukes ground to a halt when Ted decided to take a year off from rock and roll. He went to Colorado to go mule deer hunting and found the trip to be very therapeutic. After three months in Colorado, he returned and signed a solo recording contract with Epic Records in 1975.

With the release of his solo debut, “Ted Nugent”, things started to change for the better. Nugent got new management and began working with a new producer. His exhaustive touring schedule of playing 200-300 shows per year earned him the respect and admiration of a generation of working class kids who loved this bare-chested, loincloth wearing, guitar slinger whose songs extolled the virtues of hunting both game and ‘poontang’. 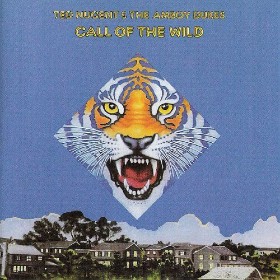 "Call Of The Wild" LP

Nugent’s new songs began to get airplay in the 70’s and beyond. His passion for conservation and hunting, along with his highly quotable opinions and somewhat cartoonish image were good print for both the national press and the emerging rock magazines. During the next thirty-plus years, Ted would expand his empires to include television, books, and magazines, and he would become one of the most recognizable of Michigan rockers. See Ted Nugent in Inductee Biographies.

Ted Nugent has stated that he is still very proud of what he recorded with the Amboy Dukes. He said in an interview that he keeps in contact with John Drake, Dave Palmer, and Andy Solomon. Ted’s old writing partner Steve Farmer lives in Oregon and recorded an album in 2000 called “Journey To The Darkside Of The Mind” with his current band, the Lectric Chairs and former Amboy Duke keyboardist Rick Lober. Others who had been part of the Amboy Dukes story have either left music or are playing on much smaller stages than Nugent.  Sadly, Greg Arama, Rusty Day, and Steve Farmer have all passed away.

“Ted Nugent and The Amboy Dukes: The Ultimate Collection”Dunhill Compact Classics. The title is a little misleading since all of the cuts on this group compilation come from the Mainstream label and feature the original Amboy Dukes, not the group that recorded with Ted on the DiscReet label as Ted Nugent and The Amboy Dukes. This set has the original killer recordings of “Baby Pease Don’t Go” and “Journey To The Center Of The Mind” as well as the great single “You Talk Sunshine, I Breathe Fire” that did not appear on any of their Mainstream albums. My only complaint with this collection is the omission of the great instrumental “Migration”.