Antoine “Fats” Domino was one of my early rock and roll heroes. During my younger years in the 50s and early 60s, I purchased mostly singles. My record collection was dominated by the 78s and 45s of my favorite artists of the rock and roll’s first decade: Elvis Presley, Little Richard, Buddy Holly along with the Crickets, Jerry Lee Lewis, Ricky Nelson, the Everly Brothers, Chuck Berry, and, of course, Fats Domino.

The very first song I heard by Fats was “Blueberry Hill”. I was nine years-old and on a vacation trip with my parents; and it was playing on a juke box at a restaurant where we had stopped for lunch. From that point on, I purchased his new singles whenever I had enough money from my paper route or asked for them as birthday gifts or Christmas presents. I also discovered that I could find some of his older records in the discount bins in various record stores around my hometown of Bay City. 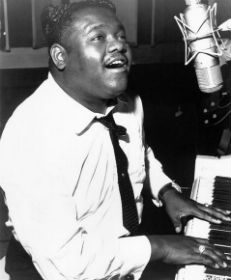 Fats appeared in two rock and roll movies in 1956. The low budget Shake, Rattle & Rock features him performing three of his hits: “Ain’t That A Shame”, “I’m In Love Again”, and “Honey Chile”. The classic The Girl Can’t Help It, in which he performs “Blue Monday” at a high school hop, was shot in Technicolor and starred Jayne Mansfield and her prominent breasts. It also included clips of Gene Vincent & The Blue Caps, Eddie Cochran, the Platters, and Little Richard.

Fats sang the title song for the lackluster 1957 film The Big Beat; and his appearance was the movie’s unquestioned highlight. His final film appearance of the 50s was in another dud called Jamboree, in which he is featured performing “Wait and See”. I didn’t view any of these films until years later when they became available on video, however, but I did get to see him on television, performing “Whole Lotta Lovin’” on American Bandstand in 1958 and “I’m Ready” on Dick Clark’s Saturday Night Beechnut Show in 1959.

The cool thing about Fat’s Domino’s recorded legacy is that the songs still hold up after nearly seven decades. His relaxed vocals and piano stylings are timeless, and they sound as fresh now as they did when they were first issued. I was greatly saddened to learn of Fats Domino’s passing on October 24, 2017, at the age of 89. Rolling Stone magazine rushed out a tribute article that same day titled Fats Domino: Twelve Essential Songs that also included links to each. I thought they got it partly right, but I didn’t include three of their selections in my more complete Fats Domino: 25 Favorite Recordings listed chronologically below.

“The Fat Man” – 1950: Domino’s first hit was recorded in New Orleans in 1949. “The Fat Man" reached # 2 on the R&B charts the following year, and it certainly has to be considered when music historians have a debate over what was the very first rock and roll song. The record’s B-side was “Detroit City Blues”. Listen to "The Fat Man": https://www.youtube.com/watch?v=aIz1cPfTRW4

“Please Don’t Leave Me” – 1953: Even though it was tough for a black R&B artist to get on the radio in the early 1950s, two of Domino’s previous singles, “Goin’ Home” and “Going To The River”, had made the Hot 100 at # 30 and # 24 respectively. “Please Don’t Leave Me” was a # 10 R&B hit, but it rocked a little too hard and had Fats scat singing "Woo hoo hoo" for over a minute before starting to sing the lyrics. Factors that probably kept this great tune off the Pop charts in the pre-rock and roll era. Listen to "Please Don't Leave Me": https://www.youtube.com/watch?v=aBIpYxmQjCw

“Blueberry Hill” – 1956: Fats Domino’s all-time biggest hit sold over 5,000,000 copies world-wide and earned him a spot performing it on the Ed Sullivan Show. “Blueberry Hill” had been a # 1 hit in 1940 for the Glenn Miller Orchestra but it peaked at # 2 for Domino, his highest ranking ever on the Hot 100. It was his sixth # 1 R&B hit, but he performed the record’s B-side, “Honey Chile”, in Shake, Rattle & Rock. Listen to Fats performing "Blueberry Hill" on Ed Sullivan: https://www.youtube.com/watch?v=bKQZy2PJtq8 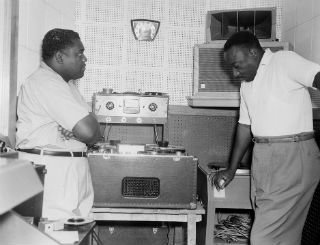 Fats with Dave Bartholomew in 1956

“Blue Monday” – 1956: “Blue Monday” was written by Domino’s longtime collaborator Dave Bartholomew and was originally recorded by Smiley Lewis in 1954. The version by Fats Domino was a big hit two years later when it got to # 5 on the Hot 100 and # 1 on the R&B chart. Fats performed the song in the big budget color rock and roll film, The Girl Can’t Help It. Watch Fats perform "Blue Monday" in the movie: https://www.youtube.com/watch?v=YjZAql3xO-E

“When I See You” – 1957: This unusual but cool little call and response tune features a kind of honky-tonk sound that was a departure from Domino’s previous releases. It was only a minor hit, peaking at # 29 on the Hot 100 and only # 14 R&B – his lowest entry on that chart in three years. Listen to "When I See You": https://www.youtube.com/watch?v=u0TcSCKrf3o

“Wait And See” – 1957: This vastly underappreciated masterpiece was featured in the rock and roll film Jamboree. The movie was terrible, but besides Fats, it included some great performances from Jerry Lee Lewis, Carl Perkins, and Charlie Gracie, as well as a speaking part for Detroit DJ Robin Seymour. “Wait And See” peaked at # 23 on the Hot 100 and # 7 on the R&B chart. Watch Domino's "Wait And See" from the Jamboree movie: https://www.youtube.com/watch?v=XO37LU21BTA 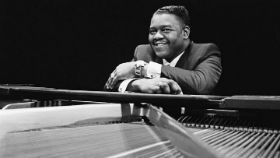 “I Hear You Knocking” – 1961: Although Fats did not enjoy a big hit with his cover of the Smiley Lewis hit from 1955, it features a great performance from a time when his records were no longer selling like they did in the past. Domino’s version of “I Hear You Knocking” peaked at only # 67 on the Hot 100. Listen to "I Hear You Knocking": https://www.youtube.com/watch?v=UU0X1kEPhqA