Madonna - What Would Make Her Blush?

What would it take to make Madonna blush? Whew! That’s a tough question to answer. It probably would not involve nudity. Madonna has appeared nude in magazines and in movies. Her coffee table book, Sex, revealed a nude Madonna in every sexual situation you could imagine and then some.

It wouldn’t be her videos and concert performances that have consistently riled the Catholic Church and the self-appointed morality police with her use of religious and sexual imagery. Politics? I haven’t seen any shame for the video on her most recent concert tour that included images of both John McCain and Adolph Hitler. Madonna is outspoken, but she didn’t seem embarrassed even by her profanity-filled appearance on David Letterman several years back.

Madonna is a tough cookie by any standard, but she seems to take great pride in meaning what she says - whether you agree with her or not. Based upon that observation, I think that there is one thing that might make her face redden. And that is if she were ever caught being two-faced - saying one thing and then doing the opposite.

I bring this up as a result of my recent visit to City Hall in Bay City to find some information as to the date that the Burdons, an Essexville/Bay City rock and roll band, was awarded the key to Bay City from then-mayor Tim Sullivan. I have to say I was surprised that the City Clerk's office had no record of a key being given to the Burdons, but not as amazed as I was with what a woman who has worked in the office for many years told me.

The office worker revealed that former Mayor Tim Sullivan and former City Manager David Barnes did not write down the names of any of the people who received keys to the city during their terms of office. What??? The highest honor the city can bestow and neither of these elected officials took the time to keep track of who, when, and why those citizens were awarded the keys?

I guess I wouldn’t have been quite so shocked if it weren’t for Sullivan’s comments and actions during the 1985 Madonna controversy that he instigated after reneging on his offer to award her the key on “moral” grounds. I thought back on how the mayor had defended his action by making a big deal out of the fact that he had given the key to a nun from St. Stanislaus Parish, and stating that it just wouldn’t do to give the same token to Madonna in light of the nude photos that were about to appear in Playboy and Penthouse.

Now does anyone know the good sister’s name or remember the charitable deeds she performed that resulted in her being so honored? Well, you’re not going to find any of that information at City Hall because no one bothered to write it down!

It’s not like it would have taken a great deal of effort. I got a chance to look over City Hall’s ‘book’ that contains the records of who received keys to the city. It’s not really a book at all, but more of a blue notebook with pages consisting of three columns. One for the recipient, one for the year it was awarded, and one column for the name of the presenter. 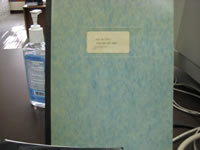 There is no room for listing whatever accomplishments merited the award, so I’m guessing that the recording of the information for each key probably required about 30 seconds of effort. What a shame - years of nothing recorded. Wouldn’t you think that keeping a complete list of the people that have been given the city’s highest honor over the years would be part of the historical record and the responsibility of the elected officials who handed them out?

The failure to record the information seems to put former mayor Tim Sullivan in an even worse light in regards to the Madonna affair, if that’s possible. Back in 1985, the mayor went on about how the key represented the citizens of the community, and yet he apparently felt it was not his responsibility to make sure that a record of the recipients was kept for that same community.

Sullivan made plenty of political hay during the 1985 election year with his pronouncements about not condoning the exploitation of women by pornography, and that he was enforcing moral standards while denying Madonna the key to the city. Meanwhile, all those folks who Sullivan did deem worthy of the city’s highest honor were never recorded.

Is there anyone else out there who detects the pungent odor of hypocrisy? And is there anyone out there who is really surprised? It seems that actions like Sullivan’s have come to be a common occurrence in political arenas, be they local or national. The sanctimonious ‘moral guardians’ who are the first to get on their soap boxes and cast stones at others most often turn out to be living in their own glass houses.