After two successive singles failed to crack the Top 40, Tommy James went into Century Sound Studios to work on a track for a proposed party rock song inspired by past hits by Gary (U.S.) Bonds and Mitch Ryder and The Detroit Wheels.  The song started as a basic rhythm track.  James and Ritchie Cordell then took the original tape and began a process of reassembling what they had, adding snippets of organ, piano, and background voices until they had a catchy melody with a verse and irresistible hook.

The night before they were supposed to finish the record, the pair convened in James’ New York apartment to write the lyrics.  They assembled a list of nonsensical one-liners but could not come up with a suitable title.  They wanted to use a two-syllable girl’s name, but every real name they came up with didn’t sound right. 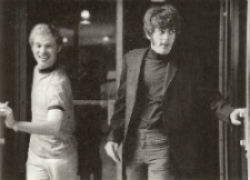 Around midnight they decided to take a cigarette break on the terrace while looking at the Manhattan skyline.  Tommy James noticed the Mutual of New York Insurance Company building a couple of blocks away.  It had a flashing neon sign on top of it with the company logo: MONY.  Just like that, they had their name, and a rock and roll party classic was born.