Tommy James & The Shondells were a continuous chart presence in the latter half of the 1960’s. “Crystal Blue Persuasion” was the band’s third-biggest single of their career, and their 15th hit on the Billboard Hot 100 in a four-year span from 1966 to 1969. 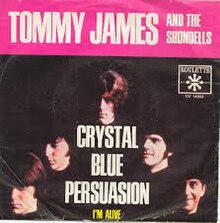 Contrary to writings that the song was an allegory about Tommy James’ involvement with amphetamines or that the song was about LSD, the title and lyrical concept for the gently grooving song came to James after reading passages from the Bible. According to Tommy’s manager, the singer was inspired by both the Book of Isaiah and the Book of Revelation which tell of a future brotherhood of mankind, living in peace and harmony.

Although the song is not religious, its sentiments fit in nicely with the popular hippie-based “peace, love, and understanding” philosophy of the times. James claims that “Crystal Blue Persuasion” is the favorite of all of his recordings and one of the band’s most requested numbers.

To promote the single, a rather primitive non-performance music video was produced in 1969 that contrasted scenes of turbulent  political events and cultural unrest with imagery of love and peace.