The Tidal Waves formed in Roseville, Michigan in 1964, inspired by The Beatles’ appearances on The Ed Sullivan Show. Their first single, “Farmer John” was released on the Detroit-based SVR label in early 1966 before being picked up for national distribution by the Hanna-Barbera Records (HBR). “Farmer John” was a huge hit in Michigan but did not do as well nationally. The Tidal Waves’ version charted at # 123 on Billboard but did much better on the Cash Box chart, peaking at # 79. 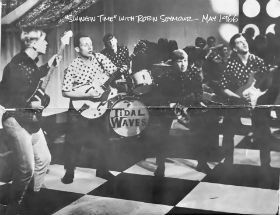 “Farmer John” was written and recorded in the late 1950s by the duo of Don & Dewey on Specialty Records. It did not become a hit, however, until 1964 when it was covered by The Premiers, a Hispanic rock group from California and reached # 19 on the Hot 100.

The Tidal Waves recorded two more singles after “Farmer John”, including the garage band classic “Action! (Speaks Louder Than Words)” before disbanding in 1967 over issues regarding the group’s royalties from their record sales.