Very few people in Bay City, or anywhere else for that matter, know where "96 Tears" was recorded. Even local folks who are interested in rock and roll are confused as to the correct city; citing Saginaw, Flint, and even Auburn as the place where the famous recording was made. That being the case, I guess it shouldn't be surprising to find that there is a great deal of inaccurate information in the writings of people not from this area when dealing with ? and The Mysterians and "96 Tears" in rock and roll history. In my attempt to research the recording career of Art Schiell and his recording of "96 Tears" at his small studio in Bay City, I uncovered quite a few mistakes and also some completely false information in a variety of rock and roll sources. 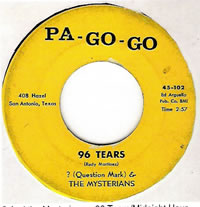 One of the first books to get it wrong was Rock Of Ages: The Rolling Stone History Of Rock & Roll by Ed Ward, Geoffrey Stokes, and Ken Tucker. On page 340, the authors declare that "96 Tears" by ? and the Mysterians was recorded in their manager's living room. The hit song was actually recorded in a small studio at 405 Raymond Street on Bay City's West Side.

The Schiell Recording Studio was located in the home of Art Schiell. The recording space was set up off his living room in a converted patio at the rear of his house. This was far from a home recording, however. Schiell had been recording small bands there for at least ten years, and many of his recordings had been released on small labels in both Michigan and Texas. Schiell miked each instrument, had a partition to separate the drums, and a windowed control room that he had converted from a closet to house his recording equipment.

Another early book that touched on "96 Tears" was Rock On: The Years Of Change 1964 - 1978 by Norm N. Nite. In the segment on ? and the Mysterians on page 503, the author refers to "96 Tears" as an "amateur recording". Nothing could be further from the truth. Schiell ran a small studio, but he was a professional who worked hard to deliver quality recordings. Art had experience recording traditional Mexican bands, polka orchestras, and religious groups before the session for "96 Tears". In addition, the band's manager employed Rudy Tee Gonzales as a producer for the session.

Gonzales was a popular performer on the 'Chicano circuit' with his band, the Reno Bops. Since ? and the Mysterians did not have a permanent bass player at the time, Gonzales recruited Fernando Aguilar from the Reno Bops to play bass on the session. Gonzales claims that it took nine or ten takes before the band nailed the song to his satisfaction. Does any of this sound like an amateur recording?

The Billboard Book Of Number 1 Hits by Fred Bronson repeats the mistake that "96 Tears" and its flip side, "Midnight Hour" were recorded in the living room of band manager Lilly Gonzales, and then goes on to further state that it "provided some unusual acoustics". The author then claims that "96 Tears" did not get radio airplay until it was broken by Bob Dell of radio station WTAC in Flint. It is true that Dell was important in breaking the song in the Detroit market, but this version of events fails to credit two local Saginaw AM stations, WSAM and WKNX, who gave the song its first big push.

My point here is not to nitpick, but to set the record straight. The recording of "96 Tears" was special in Bay City history. It was recognized nationally as an important song in the history of rock and roll when it was selected by the Rock and Roll Hall of Fame as one of the '500 Songs That Shaped Rock', and when it was honored by Rolling Stone magazine as one of the '500 Greatest Songs Of All Time' in 2004. In addition, it was voted the # 4 All Time Legendary Michigan song in 2007 on this web page. Each song has its own story, and that story should be written accurately. Also, on any great recording, credit should be given where credit is due. That's not been the case with "96 Tears". I'll share more facts and boo-boos in Part 2.