Following in the footsteps of Mitch Ryder And The Detroit Wheels, the Rationals became the second Southeast Michigan garage band to have a charting single on the Billboard Hot 100. In November of 1966, the 'Rats' spent three weeks on the national chart with their explosive cover of Otis Redding’s “Respect” after it had been picked up by Cameo Records for national distribution. The band had already had a regional hit with the song in Michigan on the small A-Square label during the late summer, almost nine months before Aretha Franklin had a # 1 smash with her version of “Respect” in 1967.

Despite having a handful of excellent singles that displayed the powerful instrumental attack of drummer Bill Figg, bassist Terry Trabandt, and guitarist Steve Correll, along with the best Michigan singer west of Bob Seger in Scott Morgan, the Rationals never reached their full potential as a recording act. Rival Michigan bands such as the MC5, the Stooges, SRC, Frost, the Amboy Dukes, and the Bob Seger System all recorded albums for major labels well before the Rats finally released their one and only LP in 1970. 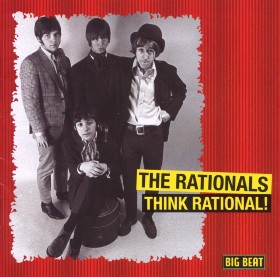 Although that lone album is not part of the package, the Rationals certainly have been given their due with the release of “Think Rational!” by England’s Big Beat Records. The 2 CD package includes everything that the band recorded from 1965 through 1968 for Hugh “Jeep” Holland’s A-Square Records out of Ann Arbor, Michigan.

Heavily influenced by the British Invasion bands, the Rationals’ first single, the killer “Look What You’re Doing (To Me Baby)”, sounds like John Lennon fronting the Kinks. The song was composed by Scott Morgan and it reached # 1 on local AM station WAAM along with its flipside, “Gave My Love”, featuring Beatle-like harmonies. “Gave My Love”, composed by Scott Morgan and Steve Correll, was actually a bigger local success, but “Look What You’re Doing (To Me Baby)” was the should-have-been-a-national-hit that was unheard outside of Southeast Michigan because it was the first release on Holland’s tiny A-Square label.

The Rationals recorded a cover of Them’s “Gloria” as a possible follow-up, but the Shadows Of Knight beat them to the punch by releasing their interpretation first. Comparing the two versions, I have to give the Rats the nod because of the better vocal. It’s interesting to speculate as to what might have happened to the Rationals’ career had the release situation been reversed. 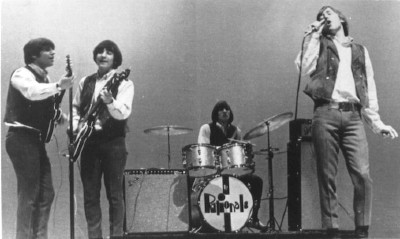 Instead, the Rats’ second single was another Morgan-Correll original called “Feelin’ Lost” backed by “Little Girls Cry (Deon’s Song)” written by fellow Ann Arbor artist Deon Jackson, who was riding high with his national hit “Love Makes The World Go Round”. “Feelin’ Lost”, which featured Steve Correll’s lead vocal and Iggy Pop on bass drum, may have been suffered a lack of Detroit radio play by the fact that deejays thought it sounded too much like the Beatles who were then topping the charts with their two-sided hit, “We Can Work It Out/Day Tripper”.

Big fans of Motown and R&B music, the Rationals and Jeep Holland spent three months working on “Respect” before it was released as the band’s third single. Holland, however, thought that the flipside, a rousing cover of Eddie Holland’s “Leavin’ Here” was the hit. These two songs are combined into what might be one of the best Michigan rock and roll singles of the 1960’s.

The Rats’ aforementioned cover of “Respect” completely blows away the 1967 recording done by Long Island’s Vagrants that was included on Lenny Kaye’s original version of “Nuggets”. But to give you an even better idea of how good the Rationals really were, compare their cover of “Leavin’ Here” with the Who’s recording of Eddie Holland’s minor Motown hit. To my ears, The Rats’ version rocks harder than the one done by the British legends.

It would have seemed that early in 1967 would have been the perfect time for the Rationals' debut album. Riding on the success of “Respect”, it could have included the first three singles as well as unreleased originals like “Someday”, “I Want To Walk With You”, and “Be My Girl”. They even had a nearly six-minute medley of “Smokestack Lightning/Inside Looking Out” that would have made a fine album cut. Both sides of the Rationals’ new single, “Hold On Baby/Sing” would also have made great choices for a terrific debut LP. Whether Jeep Holland failed to see the rising importance of albums, or it didn't happen because of the fact that the Cameo-Parkway label was on its last legs; a Rationals album was not released.

The band’s smoking cover version of Sam Hawkins’ “Hold On Baby”, featuring Bob Seger on backing vocals, was hurt when it was denied Detroit airplay because radio programmers deemed the line “get up and do the thing with me baby” too suggestive. In retrospect, it seemed that the Rationals recording career lost its momentum at a time when they had emerged as one of the top live bands in the Midwest.

The fate of the Rats may have been sealed a little earlier when Jeep Holland spurned an offer from Jerry Wexler to have the band sign with Atlantic Records. Holland apparently was a little too possessive of the Rationals to let someone else produce the group. Wexler’s interest in the band and its music was probably a major factor in his encouraging Aretha Franklin to record “Respect” for Atlantic some months later.

Convinced that “Leavin” Here” was still destined to be a hit; Holland had the Rationals record a second version of the song for the next single that was released in June, 1967. Backed with a cover of “Not Like It Is”, the record got a lot of airplay in Michigan, but nowhere else as the Cameo-Parkway label finally went out of business.

The Rationals’ final release on A-Square was a cover of a ballad first recorded by Chuck Jackson called “I Need You”. Capitol Records picked up the single after it became a hit on Detroit radio; but the Rats’ version of the song didn’t really catch on nationally despite the fact that many music aficionados, including Jackie Wilson, felt that their soulful version was superior to the Jackson original.

By the end of 1968, a variety of differences caused the Rationals and Jeep Holland to split. Some of the songs the band recorded with Holland on A-Square from 1965 through 1968 have appeared on various compilations and bootlegs over the years, but have never been collected into one package until now.

Big Beat, a subsidiary of Ace Records in England, has compiled 34 songs including singles, unreleased recordings, and demos into the most comprehensive look at the Rationals that has ever been assembled. It’s an impressive package. Even though all of the songs are over forty years old, they do not sound the least bit dated. Listening to both CDs, you’ll be mystified as to how the Rationals managed to miss grabbing the brass ring. They seemingly had all the ingredients to be a major rock and roll success story.

If there is a downside to this amazingly good package, it’s the cost. Since this is an import, “Think Rational!” will cost you $33.49 at Amazon, but you ccan find copies at other online sites for under $25. This will buy you 103 minutes of prime Michigan rock and roll along with an excellent CD booklet. Is it worth it? Of course it is, but it begs the question as to why it took a record company from England to finally put this great Michigan music collection out?

The final chapter of the Rationals’ story involves the recordings they made in 1969 and 1970. “Think Rational!” contains early recordings of “Sunset”, “Ha Ha”, and “Temptation’s ‘Bout To Get Me”. The final versions of these songs, along with six other cuts, are found on the band’s only vinyl LP. Issued in 1970 on the Crewe label, “The Rationals” has never had an official CD release although there are bootlegs available. That album, along with any unreleased material from that period, will reportedly be part of a future Big Beat import.