By late August of 1964, it was apparent to some area businessmen that there was money to be made catering to the teenage rock and roll scene. The onset of Beatlemania, and the subsequent British Invasion bands that followed, had inspired the formation of young bands all across the state. The impact of this was clearly shown during the summer months of 1964 at the Battle of the Bands competitions held at the Roll-Air outdoor skating rink on State Park Drive in Bay City.

Roll-Air was owned and operated by four area educators, Bob and Ilene Darbee and Octavian and Christine Gavrila. In early 1964, they had been contacted by WKNX-AM deejays, Bob Dyer and Dick Fabian, about the possibility of running a combination dance/Battle of the Bands on Tuesday nights during the summer. 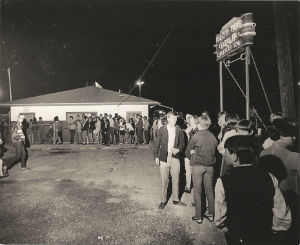 Teens lined up outside Roll-Air

The idea was a smashing success immediately. With the help of a good deal of on-air advertisement from Dyer and Fabian on WKNX, the weekly band competitions at the 700 ft. x 206 ft. cement outdoor skating rink quickly became the place to be every Tuesday evening.

The Darbees and Gavrilas reported to the Bay City Times that 16,000 teens had
attended the eight competitions that had featured twenty different bands competing for the $1,000 in prize money in the finals. The prize breakdown was: 1st place - $600, 2nd place - $250, and 3rd place - $150. Bay City's Del Raes, one of the area's finest bands at this point, won the very first Battle of the Bands at Roll-Air.

It didn't take long for some enterprising individuals to see the possibilities. If Roll-Air could do that much business on just eight dates, it would seem that a year-round facility, targeting the teen music scene and featuring live bands, could turn a healthy profit. 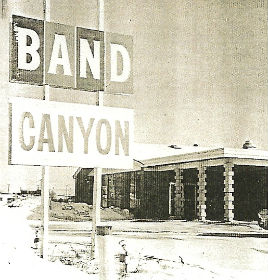 One of the early steps in this direction was taken by Bay City businessman Willard "Bill" Kehoe when he and his partner, Gary Rivet, opened a new business called Delta Promotions. The company's plan was to manage some of the better young bands and book them at the various dances and teen clubs in the Tri-Cities area.

Kehoe also joined with other businessmen to form an organization called the Euclid Development Corporation. In a February 8, 1965, article in the Bay City Times, spokesman A. J. LaMarre stated that a nightclub for young adults, 16 to 21 years of age, would be built on N. Euclid Avenue near Bay City State Park in the spring.

LaMarre said that the plans were to construct a one-story masonry building with a wood dance floor and an outdoor dancing patio. The opening was scheduled for July 1, 1965, according to LaMarre, and he stated to the Bay City Times that “we feel that this is a need of the community.” He also pointed out that there were 12,000 teenagers in Bay County in 1965, or 7.4% of the total population.

The Euclid Development Corporation pictured a nightclub atmosphere that would be restricted to young adults and that only soft drinks would be served. LaMarre told the newspaper that floor shows and live music would be furnished, and nationally known entertainers would be brought in periodically. He stated that the building's inside facilities would accommodate 1,200 people and 2,500 could be handled by using the outdoor dancing patio. He also claimed that the corporation had purchased a parcel of land for the project. 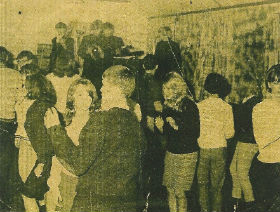 According to the same news article, the building would have a covered entry, game room, snack bar, gossip area, and would be fully air-conditioned. It would also have a paved and lighted parking area for 300 cars. A five-night per week operation was planned for the summer months, and the building was going to open three nights a week during the school year.

After the plan to build along N. Euclid Avenue fell through, LaMarre and his partners, Willard Kehoe and William Wesolek, obtained property at 377 S. River Road, located on the southern outskirts of Bay City and moved ahead with a plan that was almost identical to what they had envisioned for N. Euclid.

Calling their new teen nightclub Band Canyon, Bay City's new teen gathering place was unique in that almost all of the other teen nightclubs around the state had been established in previously constructed buildings. These ranged from VFW halls, old movie theaters, to armories; and, in one case, a former funeral home. Band Canyon, on the other hand, was built expressly to be a teen nightclub, complete with a raised stage for the bands and a sunken dancefloor. 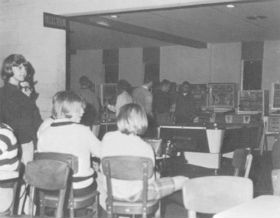 Former Bay City resident Fred Rice was attending Visitation High School in 1965 and was hired, along with some of his classmates, as part of the Band Canyon construction crew as soon as school was out that summer. Fred also remembered that his Visitation coach, Wayne Fontes, worked at the door of Band Canyon that summer to supplement his income. Fontes would soon leave Visitation to coach football in both college and the pros, most notably as the Detroit Lions' head coach from 1988 through 1996.

Fred Rice stated that Band Canyon's Visitation connection came both from A. J. LaMarre, who was a brother of Father LaMarre pastor of Visitation Catholic Church, and William Wesolek, who was a parish member and also sent his children to school there.

The owners met their original goal of opening Band Canyon by July 1, 1965. The first night, however, was a Wednesday night "sneak preview" for area adults to see and enjoy the club's facilities, as well as try to allay any fears parents might have about their teenaged sons and daughters enjoying a night filled with rock and roll and the opposite sex. 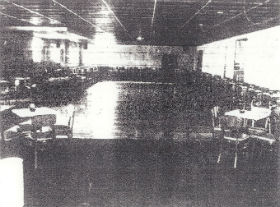 The Bay City Times covered the sneak preview the following day, and the paper gushed about Band Canyon's sunken dancefloor surrounded by tables were teens could enjoy chips, pretzels, soft drinks, and "coketails" purchased from the snack bar. The article went on to describe the recreation room, equipped with five pool tables and 20 pinball machines, and the venue's gossip room, covered with large floor pillows and featuring tables reminiscent of "off-beat" coffee houses.

Band Canyon charged admission rather than trying to use membership cards. Security was provided by three adults inside the club and two additional adults in the parking lot. The teen club was pretty liberal in terms of dress, permitting just about anything except short-shorts. The idea was to just have a good time without causing any trouble. According to the reporter, "The vibe of the club was best expressed by the sign you saw as you left the parking lot: Drive Carefully – Save Dad's Car." 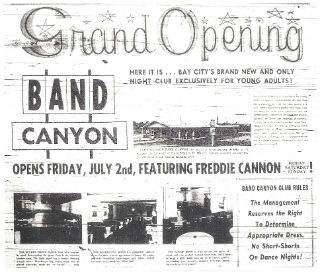 Buoyed by the Bay City Times article and a full-page ad that featured photos inside the club, the real opening was on Friday, July 2nd from 8:30 to 12:30 and featured two shows by nationally known singing star Freddy Cannon. Cannon also appeared for two shows on Saturday, July 3rd. Freddy Cannon had placed 20 singles on the Billboard Hot 100 during the past six years, including Top 10 hits with "Tallahassee Lassie", "Way Down Yonder In New Orleans", and "Palisades Park" on Swan Records out of Philadelphia. Cannon was backed by The Vibrations, a teen band from Bay City, for his shows at Band Canyon.

Band Canyon advertised regularly in the Bay City Times during its first 18 months of operation. As promised, the venue presented other national artists in the coming months. The advertisements in the newspaper show that The Byrds, Bobby Goldsboro, Sam The Sham and The Pharaohs, Del Shannon, and Brian Hyland all performed at the teen club in either 1965 or 1966. Maybe even more interesting is the listing of the many young, mostly forgotten, bands that had an opportunity to get up on stage in front of their peers and show what they could do. Band Canyon provided that opportunity.

The following is the Band Canyon schedule from July of 1965 through December 1966, taken from the weekly ads in the Bay City Times.

July 2: Freddy Cannon and The Vibrations. (Cannon had a # 16 hit with "Abigail Beecher" in early 1964. His next charting single, "Action", would be released a month after he appeared at Band Canyon.)

July 3: Freddy Cannon and The Vibrations

July 9: Jay Walker and The Pedestrians

July 10: Jay Walker and The Pedestrians

July 11: Jay Walker and The Pedestrians

July 14: Marc Allen with The Vibrations

July 22: The Byrds. (The Byrds had a # 1 hit with "Mr. Tambourine Man" during the summer and their newest single, "All I Really Want To Do", debuted on the Hot 100 two weeks before their appearance at Band Canyon.)

Aug. 18: Shawn and The Tribesmen

Sept. 25: Bobby Goldsboro accompanied by The Del Raes. (Bobby Goldsboro was touring behind his hit single, "Voodoo Woman", which had reached # 27 on the Hot 100 that summer.)

Nov. 13: Bobby and The Quintels 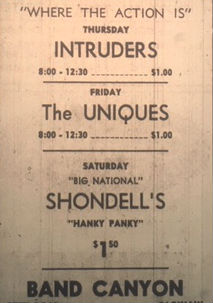 Mar. 11: The Kingbees (formerly The Fugitive Four from Grand Rapids) 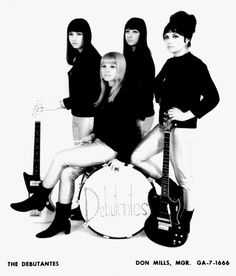 Apr. 29: The Epics (20 pairs of White Levis to be given away by DJ/host Dick Fabian)

May 6: The Big Rocks (Dick Fabian, again, gives away 20 pairs of White Levis)

May 7: The Missing Links

May 29: The Shepherds (Honda 50 giveaway from Linwood Cycle Sales)

July 1: The Ides Of March

July 3: Freddy Cannon with The Nomads 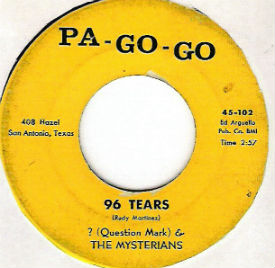 July 30: Bobby Rigg and The Chevelles

Aug. 5: The Satisfactions with Lonnie Walker from Broadway

Aug. 11: Goldie and The Gingerbreads

Sept. 16: The House Of Commons (Detroit) 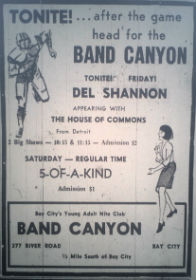 Nov. 4: Count and The Colony

Dec. 23: The In's Men (Christmas Party with gifts for everyone) 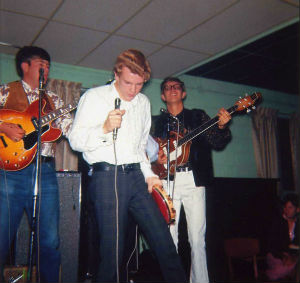 The Chancellors from Lansing on stage at Band Canyon. 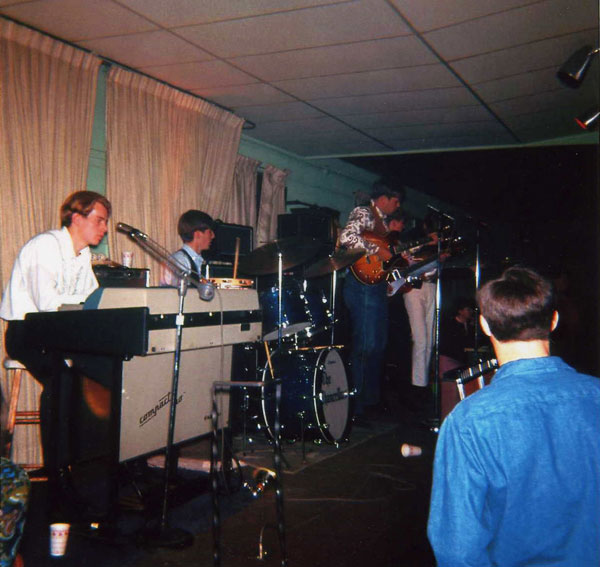