My hands were sweating on the handle grips of my trusty red and tan colored Royal bicycle as we pulled to a stop in front of St. Laurent’s Nut House. The slightly fishy odor of the Saginaw River was strong and mixed with the smell of roasting nuts as we put down our kick stands.

There was nothing like a little chocolate candy to steel the nerves for our first bike crossing of the Third Street Bridge. “Nuts since 1904” was painted in large letters on the distinctive yellow brick building and it never failed to draw laughs from the three boys from St. Joseph Grade School who piled into the shop.

My best friend, Tim LeVasseur, and I shared a terrible Detroit Times/Detroit News paper route that had just sixteen daily customers and one hundred and twenty-five Sunday customers. This translated into a lot of responsibility but very little money. The first week of the month was our big payday, and we each had the princely sum of $4 dollars in our pockets on a Saturday in the fall of 1958. Tim and I lived one house apart on Rose Street and we were always together either playing outside, usually in some sports-related related activity, or inside competing in those pre-video game days at relics like electric baseball, photo-electric football, and our pride and joy, a hockey game played with a marble for a puck.

Tim LeVasseur, my dog KoKo, and I after a game of badminton in the backyard.

We also shared a love of 1950s rock and roll and, if we weren't spending our meager paper route money on Hardy Boys novels, our money was often spent on music that we heard on the radio in the LeVasseur garage, one of our main hangouts, or on American Bandstand which was on TV every weekday after school.

Rob Hudson, the third member of our party, wore thick eyeglasses that made his eyes appear larger than normal. Hudson was fearless. He would not back down from even the older boys, and as a result, Rob had our total respect. He also had an older brother who was in high school, and Rob had access to his rock and roll record collection when big brother Tom was out of the house. This impressed Tim and I who were also entranced with the sounds that we heard on the juke boxes at the several City Dairies where we often stopped for ice cream cones or malts. Since Rob didn't have any money on him, we were going to buy him some candy at St. Laurent's, but we saw that he was expertly shoplifting his own treats while we distracted the clerk with our purchases.

We were on our way to Lucky’s Record Shop located on Midland Street on Bay City’s west side. It was the first time any of us would bike there. I had walked across the Third Street Bridge a couple of times and was more than a little anxious about riding my bike across the wooden walkway where you could see the brownish-green Saginaw River some thirty feet below through the openings in the slats.

I made sure I was third in line as we started across the bridge. At all cost, I didn’t want to chicken-out in front of my buddies by getting off and walking my bike. I distinctly remember that it sounded like a machine gun as I started rolling over the wooden planks. Cars were roaring by just a few feet away on my left as I tried looking straight ahead, my eyes as wide as saucers and my vision blurred by the bouncing ride as I held on for dear life and pedaled to keep up with Rob and Tim.

It was probably only fifteen seconds, but it seemed like much longer before I reached the sidewalk on the other side and rode past the boat storage yards and over the railroad tracks to the Midland Street business district where Lucky’s was located. Lucky’s Record Shop had recently moved one block west to a larger location. I had bought my first rock and roll records at the old location. They were 78s of Elvis Presley, Buddy Holly, The Everly Brothers, Ricky Nelson, and Jerry Lee Lewis just to name a few; and I had played them on my record player that I'd had since childhood that had a speaker not much larger than a half dollar and a heavy tone arm with a steel needle that looked like a spike.

Thanks to our parents, both Tim and I had received portable 45 record players as Christmas gifts. It was pretty common in those days for us to ask for the same things at Christmas, and our parents must have gotten together on the purchases since our presents were often exactly the same.

I liked Frank “Lucky” Peplinski the owner of the shop. Tim and I were probably two of his youngest customers and he always took the time to talk to us about records. It was Lucky who turned us on to Chuck Berry.

We parked our bikes outside the front window with the familiar pink and green neon sign; Lucky’s Record Shop. The window display also featured a life-sized plaster representation of Nipper, the RCA Victor dog. The inside of the shop was just slightly darker than most stores and had an old wooden floor that squeaked as you walked over it. 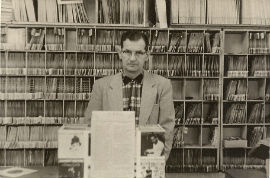 Lucky was in his usual place behind the counter filled with racks of new 45’s, a non-filtered cigarette in the corner of his mouth. “Hi-ya Buster!” was Lucky’s typical greeting to me despite the fact that I, like Tim, had my own customer name card and I could get one free record after purchasing ten. He never did call me Gary in all the years that I was a customer there. It was always “Buster”.

I enjoyed taking my own sweet time in Lucky’s and tended to ignore my friends while there. I liked to look at all the album covers first. They had clear plastic covers for protection in the days before shrink-wrapping. The albums featured exotic artists who I had not heard like Chuck Willis, the “King of the Stroll”, who wore a turban, or Little Richard who looked like he was screaming at the top of his lungs on the cover of his L.P. I didn’t have enough money at this time to buy any of these albums or anything to play them on, but they seemed magical to me all the same.

My next stop would be at the wooden racks containing the extended-play 45’s. These were particular favorites of mine since I was now the owner of that new 45 rpm record player with an automatic record changer and shut-off. The E.P.s contained at least four songs and were housed in a pictured cardboard slipcase that was like a mini-album and cost just about 40 cents more than a two-sided 45, a real bargain. I had four Elvis Presley E.P.’s so far and was planning on buying another on this day.

Hudson was pacing around the store anxious to go, but I would not be rushed at Lucky’s. I finally decided on two E.P’s: Elvis Presley's “Jailhouse Rock”, containing five songs from the film Tim and I had seen just a few months before at the Royal Theater, located a few blocks from our homes, and “The Chirping Crickets” that included both "That'll Be The Day" and “Oh Boy!”. The only single 45 I bought was Ricky Nelson’s newest release, “Believe What You Say”, that featured a picture sleeve with a cool photo of Ricky. 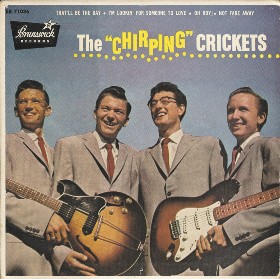 Although he was not quite as crazy about rock and roll as I was, Tim was a big fan of Duane Eddy, who had become a star with the instrumental hit "Rebel Rouser" that featured his "twangy" guitar. Tim bought Eddy's newest 45, "Ramrod", which we both loved and felt was his best record yet.

Lucky marked off the purchases on our customer cards. Just four more records and I would get a free 45 at his shop. The ride back over the Third Street Bridge with our brown bags containing the records wound tightly around our handle grips wasn’t nearly as scary as the journey over. I even had enough change in my pockets to buy myself and Hudson ice cream cones at the dairy on Johnson Street near his home despite the fact that he had punched me in the arm at least a half dozen times trying to hurry me up at Lucky’s.

Feeling pretty pleased with ourselves and our purchases, Tim and I left Rob Hudson outside the dairy and headed homeward. We were inseparable in those days. After getting home, we would often lie on the floor of my bedroom in front of my record player and listen to our new purchases over and over again. For pre-teen kids who were best friends, it just didn’t get any better than that.