Many of the nominated artists on the Michigan Rock and Roll Legends ballot come from the state’s vibrant garage band/teen club scene of the 1960’s. Most of these bands recorded and released just a few singles on small independent labels. Finding and listening to these recordings over forty years later can be a challenge. Fortunately, there are some excellent compilations out there that have made some of these hard-to-find 45's available to those of us who do not have the original singles but love this important genre of Michigan rock and roll.

For vinyl collectors, the ‘holy grail’ is “Michigan Nuggets”, an impressive 2 LP set on Belvedere Records. The 31 cuts include many of the biggest Detroit-area garage band hits of the 60's including those by the Woolies, the Rationals, the Unrelated Segments, the Shy Guys, the Human Beings, Tim Tam & the Turn-Ons, the Wanted, the Underdogs, and the Tidal Waves. It also has six rare Bob Seger recordings from the Hideout label including “Persecution Smith”, “Chain Smoking”, and “East Side Story”, as well as his classic 1971 Capitol single, “Looking Back”.

Besides all these treasures, the double album features four early MC5 titles, and the hard-to-find Amboy Dukes’ single, “You Talk Sunshine, I Breathe Fire”. For laughs, you even get an audio curio called “An Important Message” featuring Dr. Jack Van Impe railing against the evils of rock and roll! 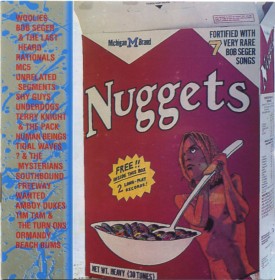 A nice vinyl supplement to “Michigan Nuggets” is the “Michigan Rocks” LP on Seeds & Stems Records. Although it only has ten cuts, “Michigan Rocks” includes songs by important Michigan artists not represented on the “Nuggets” collection including “I’m So Glad” by the Scot Richard Case, the Frost’s “Rock And Roll Music”, the Stooges’ “1969”, “Long Hard Road” by Mitch Ryder, Third Power’s “Persecution” and “Rock ‘N Roll” by Detroit.

On the CD front there are many more choices. One of the best Michigan compilations you are ever going to find is “Scream Loud!!! The Fenton Story” on Way Back Records. This 2 CD set focuses on a terrific but underappreciated group of bands from Southwest Michigan who recorded a batch of incredible garage rock singles at Dave Kalmbach’s studio in Sparta, Michigan, 15 miles north of Grand Rapids.

Even though this outstanding compilation has been issued by a German label, it was put together by Michigander Mark Taylor, and it includes a nice booklet with lots of information about the bands written by Frank Uhle. A bargain by any measure, “Scream Loud!!!” contains 61 primo slabs of Michigan garage rock from 32 different bands.

Another outstanding Michigan compilation is “Friday At The Hideout: Boss Detroit Garage 1964-67”. Featuring bands who recorded for Dave Leone’s Hideout Records, this set is highlighted by six cuts by the Underdogs including their early classic singles “The Man In The Glass”, “Friday Night At The Hideout” (a.k.a. “Judy Be Mine”) and “Get Down On Your Knees”. The Pleasure Seekers’ fabulous single, “What A Way to Die”/Never Thought You’d Leave Me”, represents the recording debut of Suzi Quatro and is another highlight of this collection. Glenn Frey’s early band, the Mushrooms, is represented by the cut “Burned”, and Bob Seger can be heard playing keyboards as a member of Doug Brown and The Omens on the single “TGIF (Thank God It’s Friday)”. 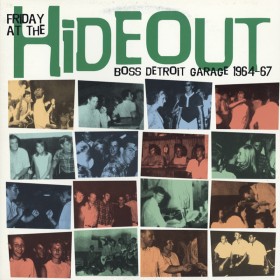 "Friday At The Hideout"

The excellent booklet written by Billy Miller details the history of Dave Leone, “Punch” Andrews, the Hideout teen clubs, and the record label and the artists who recorded on it. The only thing that prevents this from being the very best Michigan compilation is that, because of licensing problems, Bob Seger’s early singles on the Hideout label (“East Side Story”, “Persecution Smith”, “Ballad Of The Yellow Beret”, and “Heavy Music”) are not included. Brownsville Station’s Hideout single, “Rock and Roll Holiday” is also missing in action. Despite these omissions, it is still a very worthwhile purchase.

Hugh “Jeep” Holland’s legendary A-Square label in Ann Arbor is the subject of a great new Michigan CD compilation entitled “A-Square (Of Course)” from Big Beat Records out of England. This is an unusual collection because the label’s most successful act was the Rationals, yet they’re not on the CD. This is because Big Beat is in the process of putting together a deluxe Rationals anthology called “Think Rational” that will include everything they recorded for the A-Square label.

Even without any Rationals’ songs, this CD is loaded with goodies. The Scot Richard Case is featured on five cuts, of which two are unissued. The issued songs include the band’s first single, “I’m So Glad/Who Is That Girl”. The CD also contains both sides of the MC5’s only A-Square single, “Looking At You/Borderline”.

Another one of Jeep Holland’s successful bands was The Thyme. “A-Square” presents their hit “Love To Love” among the seven Thyme songs, four of which were previously unissued. Dick Wagner is found on four of the album’s cuts; three previously unissued demos with his Saginaw-area band, the Bossmen, and also on an early rendition of the Frost classic, “Mystery Man”. Other highlights include the only known recording of Ann Arbor’s Prime Movers featuring vocals by drummer Iggy Pop, and the Up’s unique single, “Just Like An Aborigine”.

The CD booklet offers a wealth of pictures, information about the artists and their recordings, and also provides an inside look at Jeep Holland’s music operation. “A-Square (Of Course)” is an import from Ace Records in the U.K. 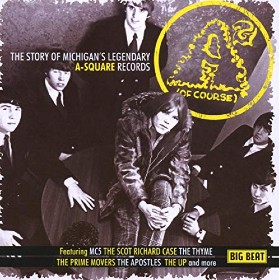 Yet another interesting looking compilation is “Where You Gonna Go? Motor City Garage Bands 1965 – 1969”. This set focuses mostly on the bands who recorded for a small independent record label/production company from Detroit called SVR. By far, the two most successful and well-known of these are the Unrelated Segments (“Story Of My Life”, “Where You Gonna Go?”) and The Tidal Waves (“Farmer John”, “Action! (Speaks Louder Than Words)”.

I haven’t bought this one yet because I already own a CD that has all of the songs that both of these groups recorded for SVR. The “Where You Gonna Go?” disc, however, includes cuts from a number of other Detroit-area bands including The Boys, The Quintette Plus, The Unknowns, The District Six, The Couriers, and The Lykes Of Us, along with a 16 page booklet.

There are several other Michigan garage rock compilations that are less interesting because they do not have the informative CD booklets that highlight the above sets. A good case in point is “The Best Of Impact Records”. This label was founded by Harry Balk who once managed both Del Shannon and Johnny and The Hurricanes. Balk established his Detroit label in the mid-60’s and had a big hit with the Shades Of Blue’s single, “Oh How Happy”, written by Edwin Starr.

The CD, which features 25 songs recorded on Impact, is hurt by the skimpy booklet that provides little information about the artists, songs, or Balk’s operation. The set is split between garage rock (The Human Beings, The Boss Five, The Sheppards, and The Wheels) and pop (The Shades Of Blue, Mickey Denton, The Lollipops, The Classmen etc.)

A worse offender in the lack of information department is “Michigan Mayhem! Vol. 1”. Of the 28 cuts by 24 different bands, only The Rationals and The Scot Richard Case are mentioned in the inadequate booklet. Several of the songs can also be found on the much better “Scream Loud!!! The Fenton Story” collection. But we get no information about bands like Sweet Cherry, The Illusions, James T. & The Workers, and The Outcry, just to name a few.

“Michigan Mayhem! Vol. 2” does a much better job with its booklet in that it gives some information about every band, but it still doesn’t compare to the compilations mentioned earlier. Again, several of the 29 cuts on “Vol. 2” can be found on the Fenton set. But it has a lot of interesting singles by The Friars Of Youth, The Pickwick Papers, The Marauders, The Fugitives and many more. I've read that there is now a “Vol. 3” in the series but I haven’t yet seen the track listing.

The music on all of these sets is definitely worth hearing, and I hope this review can serve as something of a guide to purchasing some great Michigan rock and roll.