Not Only Women Bleed - Sex, Drugs, and "Rock And Roll Music" in Digital

Dick Wagner is one of the all-time greats in the vast and varied history of Michigan rock and roll. Being a fan of Wagner since his days as the lead singer and songwriter of The Bossmen, the Saginaw Valley’s answer to The Beatles, I was looking forward to the publication of his long-rumored book that covered his remarkable career in music. Not Only Women Bleed: Vignettes from the Heart of a Rock Musician was published as an eBook early in January, 2012. One hoped that this would be the vehicle that would bring Wagner the national attention he so richly deserves.

Although Dick Wagner’s distinctive guitar playing has been featured on recordings by rock and roll heavyweights such as Alice Cooper, Lou Reed, Kiss, Peter Gabriel, Mark Farner, Nils Lofgren, and Aerosmith, he seems to have somehow managed to escape the notice of many rock fans and critics. Wagner’s name, for example, was nowhere to be found on Rolling Stone’s 100 Greatest Guitarists Of All Time, even though a couple of artists who employed him (Lou Reed and Joe Perry) made the list. I would also be very surprised if Wagner has ever been considered for induction into the Rock and Roll Hall of Fame in the category of ‘Sideman’, despite the fact that he was an important part of the best live bands in the careers of Hall of Fame inductees Reed and Cooper. 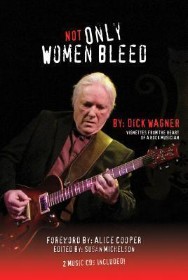 It was Dick Wagner’s songwriting that first attracted me to his recordings. From late 1964 to early 1967, Wagner’s songs made up the bulk of the half-dozen Bossmen singles issued on small independent Michigan labels like Dicto, Soft, M & L, and Lucky Eleven. Wagner had a knack for writing catchy pop/rock tunes along the lines of the Lennon/McCartney songs of the early Beatles. He also produced and contributed songs to other Mid-Michigan bands including the Cherry Slush, Tonto & The Renegades, and The Pack.

The Bossmen broke up in 1967, and Wagner formed The Frost. After taking Detroit by storm with their dynamic live shows, the band was signed by Vanguard Records. Despite releasing three strong albums containing seemingly can’t miss songs like “Mystery Man” and “Rock And Roll Music”; their label failed to break the group nationally.

Following another commercial failure with his power trio Ursa Major, Wagner went on to do some session work with the original Alice Cooper band. He then played on Lou Reed’s “Berlin” album and joined his touring band. The resulting “Rock ‘N’ Roll Animal” livealbum was released in 1974. The twin guitars of Wagner and Steve Hunter were the record’s highlight, and it provided Wagner with his first national acclaim.

Wagner’s most successful foray onto the national rock scene, however, was his stint as the songwriting partner and band leader for Alice Cooper’s first solo albums and tours. Cooper and Wagner co-wrote most of the songs on the concept album “Welcome To My Nightmare”, including the hit single “Only Women Bleed”. It was the first Wagner composition to reach the Top 20 on Billboard’s Hot 100. Although he and Cooper would go on to write songs that would chart higher, “Only Women Bleed”, is undoubtedly Wagner’s signature song, hence the title of his book. In the past 38 years, it has been covered by over 25 artists including singers the caliber of Tina Turner and Etta James.

All of this and much more is covered in greater detail in Wagner’s highly entertaining memoir, Not Only Women Bleed. His book is novel (pun unintended) in a couple of significant ways. First and foremost, as the complete title of the memoir indicates, his story is told in a series of 192 vignettes, or brief narratives. They are divided into eight parts and are made up of the people, events, places, and things that played roles in Wagner’s life and career. Although they are mostly chronological, the vignettes are written in such a way that the reader can easily skip around; and one wouldn’t necessarily have to go through it like a more traditional book.

This approach is unusual for a biography; and I would compare it to sitting around with Dick Wagner and a couple of cold beers while he regales you with the always fascinating, and sometimes sordid, tales of his rock and roll lifestyle. I was tuned in to Wagner’s obsession with music early on, but I was completely unaware of his addictions to both sex and drugs until he published his book. He pulls no punches when he reveals his vast appetite for sexual activity and the pitfalls associated with his drug problem. I was surprised at some of the things that Wagner disclosed. It takes guts to be that honest with your public.

The other compelling thing about Not Only Women Bleed is that it was published only as an eBook. To my knowledge, it is the first rock and roll book to be issued only in the digital format, and most certainly, the first by a Michigan artist.

I admit I was disappointed when I learned that Wagner’s book was only available as an eBook, even though the $9.99 price tag was more than fair. The problem was that all of the other books in my rock and roll collection are either hard or soft covered. There is something comforting about going to my bookshelf and seeing them there, and pulling them off the shelf when I want to read something or check a fact.

It wasn’t as though I hadn’t read a digital book. Lynn-J and I purchased the last two books that followed The Girl with the Dragon Tattoo for our iPad, and then bought four eBooks that are part of A Game of Thrones series. The iPad allows you to read in your most comfortable chair, in bed, or even outside; so it’s very similar to reading an actual paper book. I guess I’m just not completely happy with a digital copy. It’s similar to how I feel about my iPod. Although I probably listen to it more than any other audio source, and I now purchase almost all of my music through iTunes, I still like to have that CD-R of any album that I buy along with the cover and the list of songs.

Because I’m such a big Dick Wagner fan, my desire to read Not Only Women Bleed overcame my reluctance to buy a rock and roll eBook, and I’m glad I did. Although I would have liked him to spend more of the vignettes on his Michigan years with The Bossmen and the Frost, readers outside the state would undoubtedly find his years with Alice Cooper and the other big stars he worked with far more interesting. Wagner reportedly spent three years working on this project, and he did a masterful job in covering his entire career.

The book did well upon release in January, getting very positive reviews and spending the first few months in the Top 20 of the Amazon.com Hottest New Entertainment 100 Top Books Chart and at least one week at # 1. But based on a recent post from Dick Wagner on his Facebook page in late March to his 5,000 plus friends, sales have dwindled of late. He wrote: “I did not realize what resistance to technology I would face in publishing my book as an eBook. Either a bunch of these 5,000 friends: 1.) don’t read 2.) don’t care 3.) don’t have $9.99 or don’t know that Not Only Women Bleed is even published. I’d say 4.) don’t like the book, but they’d have to have read it to not like it.”

He went on to write: “Truly, I believed that with 6,460 friends and fans on these Dick Wagner pages, more of you would be anxious to read my life and career stories. Honestly, those who have read it have raved about the writing style and actual content. I humbly offer up to you, that my book is honest, revealing, humorous, and a little wicked and profound/profane”.

I’m in complete agreement with Wagner’s last two sentences, but let’s examine statements 1 – 4 about the 5,000 friends a little more closely. According to a 2007 Associated Press Ipsos Poll, one in four adults (27%) read no books. The average adult read over six books per year, but half of those who read books, consumed less than six. Without going through all the math, the above statistics indicate that a potentially large segment of Dick Wagner’s Facebook friends are not likely to buy the book no matter how much they like his music.

There is also the matter of the average age of the typical Dick Wagner fan. I’m going to guess that the average fan would be between 55 and 70 years of age based on the fact that Dick’s career started almost 50 years ago. How many of these folks have ever downloaded anything on their computer, and how many have an iPad or eBook reader that is independent of their PC? Amazon offers a free eBook reader for those who purchase Not Only Women Bleed but, like the book, it has to be downloaded; and who wants to read a book seated in front of their computer?

A Harris Poll in 2011 found that just one in six Americans now use an e-reader device, but one in six say that they will get one within the year. Among those who read at least one non-fiction book per year using such a device, the largest group (29%) read biographies.

This bodes well for the future of eBooks, probably even biographies that deal with rock and roll. It doesn’t help Dick Wagner’s current sales slump for Not Only Women Bleed, however. He is paying a price for being on the cutting edge of the new technology. The challenge is to get his current fans to follow his lead and embrace it as well. It seems the older one gets, the more difficult it is to change; but I know if they do, they will love the book. Scolding them won’t work, so let’s invoke Dick Wagner’s former employer in trying to lure those reluctant rock fans into the brave new world of digital downloads. In the immortal words of Lou Reed; “Hey babe, take a walk on the wild side”.

P.S.  In July of 2012, a hardcover edition of the book was made available for fans of Dick Wagner and rock and roll in general.  It contains some additional stories and also includes two CDs.