Return Of ? And The Mysterians

Wow! I go back a long time with ? & The Mysterians. I was attending Delta College in 1965 when the then-young band played at a college beer party held at a small hall near Auburn, Michigan. One of the Delta frat boys had heard the Mysterians practicing on a Monitor Township farm while driving home from school and hired them on the spot. Fred Herter, one of the organizers of the event, claims that ? & The Mysterians were paid the princely sum of $10 for the gig.

The tiny hall had two rooms, one with the bar and the other with a small stage. It was probably one of the band's earliest performances because when I went into the other room, beer in hand, I was surprised to find many of the group's parents, grandparents, and younger brothers and sisters seated for the performance.

I was immediately taken with the band's sound. The group was playing a combination of R&B covers mixed in with popular British Invasion hits of the day. I was particularly impressed with the way they performed the songs of the Rolling Stones, and by the stage presence of the lead singer who was already wearing his trademark shades. I left the party without ever finding out the name of the band.

By the summer of 1966, however, everyone in the area under the age of 21 was well aware of ? & The Mysterians. Their single,"96 Tears" on the tiny Pa-Go-Go label, was topping the charts of local radio stations WSAM and WKNX and was starting to get airplay on Flint's big AM station, WTAC. 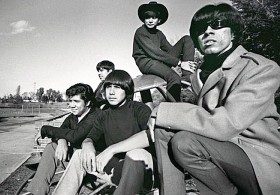 Incredibly, "96 Tears" had been recorded in a small studio in the rear of a house on Raymond Street in Bay City. Art Shiell had been operating his "Shiell's Recording Studio" at the back of his home for a number of years, but he'd never recorded anything remotely resembling a hit until "96 Tears".

Later in the summer, the Cameo-Parkway label leased the recording from Pa-Go-Go and distributed the single nationally. "96 Tears" first appeared on Billboard's Hot 100 in September and by the week of October 29, 1966, the song was the # 1 single in the United States.

? & The Mysterians placed four more singles on the Billboard charts ("I Need Somebody", "Can't Get Enough Of You Baby", "Girl (You Captivate Me)" and "Do Something To Me") before the Cameo-Parkway label went out of business and the band faded into relative obscurity.

This reminiscence brings me to the point of this article. ? & The Mysterians made a sensational return to Bay City on Monday, July 2, at the Wenonah Park Friendship Shell as part of the Fireworks Festival. I have never heard the band play with as much energy and drive as they displayed on Monday night. It was hands-down the best Rock and Roll performance I have ever seen at the Shell.

The band came out like they wanted to prove something to the city where their first hit was recorded, and they certainly did to the assembled crowd. The drumming of Robert Martinez set the tone for the evening, and bassist Frank Lugo was right with him in holding down the bottom. The organ of Frank Rodriguez is in many ways the signature instrument of ? & The Mysterians, and "Little Frank" was great as usual. I was really impressed with Bobby Balderrama's guitar playing. Bobby was using the amp from his own Robert Lee band and the difference it made to the sound of the band was impressive. 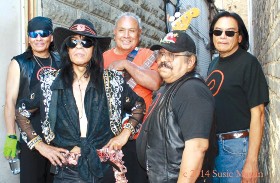 I was most interested in seeing how ? would be on stage after suffering through the disasterous fire this past winter that claimed most of his possessions. He bounded out for the first number, "Do You Feel It", dressed in an orange bolero shirt tied above the midriff with orange boas streaming down each side of his black leather pants. All he needed was a basket of fruit perched atop his cowboy hat and he would have been the "Carmen Miranda" of Rock and Roll. But you expect ? to be a little outrageous, that's just his style.

The fire seems to have toughened ? in a way. There was no foolishness about being from another planet, he was there to rock like he had nothing to lose - and I guess he really didn't. The group played all the hits in their lengthy set along with some great covers of "That's How Strong My Love Is", "Stand By Me", and "Sally Go 'Round The Roses".

The show ended with an extended version of "96 Tears", but wait, they weren't done yet. The band came out for its encore with a great version of James Brown's "Try Me" before blasting into an incredible 12-minute version of "Satisfaction". Wow! again.

Maybe I'm dreaming, but wouldn't it be great if there was a historic designation of some kind at 405 Raymond Street, the house where "96 Tears" was recorded forty-one years ago? It was, and will be, the only # 1 hit ever recorded in Bay City. In addition, the song is known and loved all over the world. Really, isn't it time that our city and state started recognizing the cultural importance of Rock and Roll? Maybe the return of ? & The Mysterians to Bay City will get something started.