Travelin' Man: On The Road With Bob Seger

It’s not as easy as you might think to purchase a gift for a friend or family member who is an avid music lover. Just going out and buying a CD seems quick and relatively painless, but it can actually be a tricky proposition unless you are very well acquainted with the music collection and personal tastes of the recipient.

An interesting alternative to buying an actual recording is to purchase a music-related book as a gift. Most music fans who spend a good deal of money on recordings would probably balk at dropping $20 to $30 on a book, yet not think twice at spending the same amount or more on CDs. That fact in itself makes it an ideal gift idea.

If you are thinking of going this route, it’s still important to know something about the music tastes of the recipient. But if the person you’re buying for is a fan of classic rock and roll and also happens to be a Michigander, I would highly recommend the new photo book Travelin’ Man: On The Road and Behind The Scenes with Bob Seger by Tom Weschler and Gary Graff.

Weschler worked for the Bob Seger organization from the late 1960’s to the late 1970’s as both a photographer and tour manager. He first started photographing musical events in 1964 and is still employed as a photographer in Metropolitan Detroit. 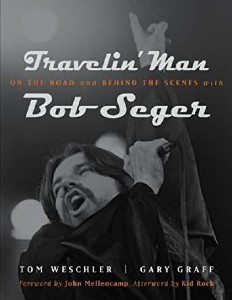 Graff is an award-winning journalist based in Detroit. He was the former music critic at the Detroit Free Press and his writings have appeared in numerous national publications. Graff was also the founding editor of the MusicHound Essential Album Guide series.

Seger would, at first glance, seem to be an unlikely subject for a photo book. He would not qualify as a glamour-puss by any stretch of the imagination. With his grey hair and beard, Seger looks more like a retired auto worker who would be most comfortable hanging around the house wearing a pair of faded jeans and T shirt while fixing the family car or working in the yard.

Even on those rare occasions when he has stepped into the public eye, such as the celebrity round of the Buick Open, Seger resembled an average Joe who somehow stumbled into the spotlight. Partnered with the immaculately attired and sculpted golf god Tiger Woods at the 2009 Buick event, Seger, played the round in a rumpled polo shirt, baggy shorts and visor. He looked every bit like the guy from down the street who hacks away in a weekly golf league with deer hunting pals at the local community course rather than a rock icon who could fill auditoriums and command stages across the United States. 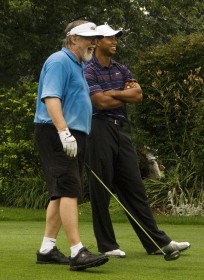 In fact, I can’t think of any major rock star who has kept a lower profile than Bob Seger. Unless he is promoting one of his infrequent new albums, he rarely appears on television. Despite being inducted into the Rock and Roll Hall of Fame in 2004, Seger has never done any extensive interviews in Rolling Stone nor been the subject of a book prior to Travelin’ Man.

None of this matters to the vast majority of Bob Seger fans like Kid Rock who wrote the Afterword in Travelin’ Man. Rock, who grew up listening to Seger’s music blaring from the weekend barn parties his parents hosted, stated that “I do think that Seger’s the best in terms of the heartland rock ‘n’ rollers. It all comes down to the songwriting ability, the singing ability, the songs - just the overall feel of the music. I don’t think anything compares to it. It’s on its own level, and it seems like it just gets better. It’s not something I’ve outgrown: I can turn to it at any point, and it reminds me of greatness.”

The book is a collection of Tom Weschler’s photographs that take you behind-the-scenes at some of Seger’s early recording sessions and the countless gigs he played as he struggled along the long hard road from being a local sensation to a nationally acclaimed recording artist. There is not a great deal of text, but Weschler’s recollections give weight to his photos, and Graff provides a detailed Seger discography and career timeline that helps pull everything together.

Of greatest interest to long-time Seger fans will be Weschler’s photographs from 1969 through 1973. Most of the albums he recorded during this time period have been long out-of-print, and only a few of these photos saw the light of day prior to the publication of Travelin’ Man. Some of Weschler’s photographs and ideas were used on the albums “Mongrel”, “Brand New Morning”, “Smokin’ O.P.’s”, “Back In ’72”, “Seven”, and “Live Bullet”; all of which Seger released during that time period.

It’s fascinating to get some inside information about those early works and, in the process, gain insight into the thoughts that went into the creation of each of the LP jackets. Weschler also includes some of the shots that were not used, and it is interesting to learn why they were rejected.

By the time that Bob Seger scored his career breakthroughs with the Top Ten album, “Night Moves”, and its subsequent “Night Moves” hit single, Weschler had left the Seger camp. Although the period of Seger’s national stardom is covered in the book, the emphasis is clearly on the early years when Tom Weschler had complete and unfettered access to a star on the rise.

Travelin’ Man will make you want to go back to your record collection, pull out those old Bob Seger albums and play them again while looking at the photos in this excellent book. Trust me, there is no greater treat for the music junkie than that.