Terry Knight & The Pack first heard “You’re A Better Man Than I” when they opened for The Yardbirds at the Flint IMA auditorium in December of 1965. The English band was riding a string of three consecutive Top 20 singles in the U.S. They had recently released their second LP, “Having A Rave Up With The Yardbirds” and “You’re A Better Man Than I” was the album’s first track. The song had been recorded at the Sam Phillips Studio in Memphis in September, and Phillips himself engineered the session. 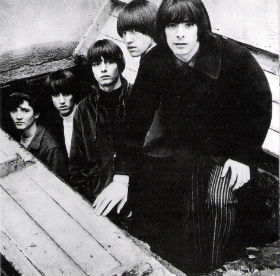 Being an Anglophile of the first order and discovering that the Yardbirds had no plans to release “You’re A Better Man Than I” as a single, Terry Knight booked the band into the Audio Recording Studio in Cleveland on Valentine’s Day in 1966 to produce a cover of the song for their Lucky Eleven label out of Flint.

Released as “Better Man Than I”, the 45 became the first regional hit for Terry Knight & The Pack. It reached # 1 on Flint’s WTRX the week of March 18, 1966 and it also moved into the Top Ten on radio stations in Detroit and Cleveland. Knight, being a former DJ, had several good radio connections that undoubtedly helped the song, but in the final analysis Terry Knight & The Pack recorded an admirable version and it spent three weeks in the upper reaches of the Billboard charts in April of 1966.