Seger's most famous composition was about the freedom and looseness we feel when we're young, and how it can be lost as we grow older.   "Night Moves" evokes memories of growing up in Michigan in the 60's with grassers in farm fields and young lovers parking in deserted rural areas.  The song was loosely based on real events in Bob's life. 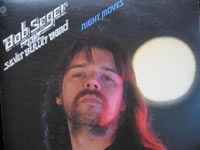 After eleven years of being a popular regional act, "Night Moves" provided Seger with his first national Top Ten hit. The song became the springboard to a series of memorable singles and albums that established him as a major force in rock music.

The photograph of Seger that graces the cover of his "Night Moves" album was shot by Bay City native Tom Bert, the first honorary inductee to the MRRL online Hall of Fame.