103.) Jenny Take A Ride - Mitch Ryder and The Detroit Wheels 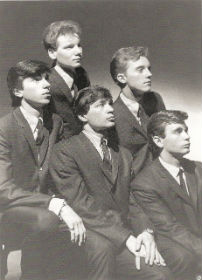 The group first came together in 1964 in Detroit as Billy Lee & The Rivieras with lead singer Billy Levise, lead guitarist Jim McCarty, drummer John Badanjek, bassist Earl Elliott, and rhythm guitarist Joey Kubert. By mid-summer they had attracted a fanatical local following. The band’s live performances were so potent that the unrecorded group was soon headlining over major Motown artists at clubs and casinos in the Detroit area.

The band changed its name to Mitch Ryder and The Detroit Wheels after signing with Bob Crewe’s New Voice label. What followed was a wild two-year ride through the star-making machinery of the record industry that brought them fame but not fortune and tore the group apart in the process.