The Four Tops’ biggest hit of 1966 was written and produced by Motown’s top production team of Holland-Dozier-Holland. According to the Tops’ Duke Fakir, the trio realized that when lead singer Levi Stubbs hit the top of his vocal range, it sounded like someone hurting, so H-D-H liked him to sing up there so that you could hear the tears in his voice. 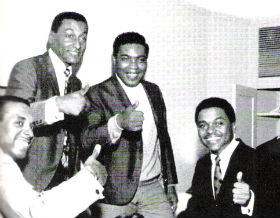 Stubbs delivered many of the lines in a tone that straddled the line between singing and shouting. The song features a dramatic, semi-operatic tension and release and contains a rock-solid groove compliments of the Funk Brothers.

“Reach Out I’ll Be There” is one of the most-well-known Motown songs of the 60's and is today considered to be the Four Tops’ signature song. It was # 1 on the Hot 100 for two weeks in October until it was replaced by “96 Tears” by ? and The Mysterians.

It also reached # 1 on the British charts in 1966 where it stayed for three weeks. At the time, it was only the second Motown song to reach # 1 in Great Britain.