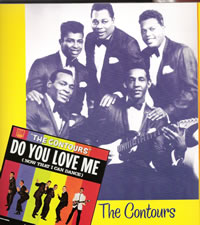 According to one version of the song's story, Berry Gordy Jr. wrote "Do You Love Me" for the Temptations, but when they were unavailable, the song was passed to the Contours. Joe Billingslea of the Contours relates a different version, however. He claimed that the song was written for his group and that Gordy only suggested that it might be given to the Temptations if the Contours continued to have problems while rehearsing it. When they finally mastered it in rehearsal, the Contours' legendary version of "Do You Love Me" was released on Motown's new subsidiary label, Gordy Records.

The Contours might never have been signed to Motown if Jackie Wilson had not phoned Berry Gordy Jr. on their behalf. The Contours had failed their initial audition with Motown; but group member Hubert Johnson was Wilson's cousin, and he asked the singing star to call the label on the group's behalf. Gordy changed his mind about the Contours as a result of the call, and the group was signed to Motown in 1961.

"Do You Love Me" would become the Contours only Top Ten hit, although they did chart seven more singles in the Hot 100. "Do You Love Me" also spent three weeks at # 1 on the R&B chart in 1962.

The original version of the song became a big hit all over again in 1988 after it was featured in the soundtrack of the hit movie Dirty Dancing.