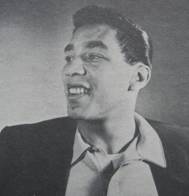 Smokey RobinsonWilliam “Smokey” Robinson was born in Detroit. He got the nickname “Smokey Joe” from his uncle because of his light complexion. Eventually it was shortened to just “Smokey”. He grew up listening to a wide variety of music – big band, gospel, jazz, and blues on the family’s Victrola phonograph. As a result, Smokey was very interested in music at an early age, and he even started writing songs as a child. He claims that his musical roots began with songstress Sarah Vaughn. It was her voice that shaped Smokey’s singing style.

His first musical training started in fifth grade where he sang in glee club. By eighth grade Robinson had formed a quartet and wrote his class graduation play, a musical about the consequences of dropping out of school. He was good friends with Aretha Franklin as they were growing up and very early on he was impressed not only by her musical talent, but also by the fact that she was performing on gospel tours with her father, Reverend Franklin, before she was a teenager.

When rock and roll hit, Smokey became a big fan of tenor Clyde McPhatter. Around the same time he heard a Detroit vocal group called the Diablos and was further influenced by the high tenor voice of lead singer Nolan Strong. By the time he was attending Northern High School, Robinson had formed another vocal group with his friends called the Five Chimes. This was the group that would eventually evolve into the Miracles. Besides Smokey, the group consisted of Warren “Pete” Moore, Clarence Dawson, James Grice, and Donald Wicker. Wicker was soon replaced by Ronnie White, and when Dawson quit, his spot was taken by Emerson “Sonny” Rogers. His cousin Bobby Rogers then replaced Grice.

In the summer of 1957, the group, now calling themselves the Matadors, heard that Jackie Wilson’s manager was auditioning for new talent in the Detroit area. When Sonny Rogers left the group to enlist in the Army, his place was taken by his sister Claudette and the classic line-up was now in place. Although Wilson’s manager wasn’t interested, their audition happened to be attended by Berry Gordy who saw something in the young group and was impressed by the original songs they performed. Neither Berry Gordy nor Smokey Robinson could have known that their meeting on that day would change their lives forever.

Berry Gordy had written several hit songs for Jackie Wilson, and he helped Smokey refine his songwriting style. He also became the group’s manager, producer, and Robinson’s lifelong mentor. He had the group change their name to the Miracles for their first single, “Got A Job”, in 1958. It was an answer song to “Get A Job”, a # 1 doo-wop hit by The Silhouettes. Smokey wrote the song after watching the Silhouettes perform their hit on American Bandstand. “Got A Job” became a minor hit after Gordy sold their recording to End Records.

After the group recorded a second single for End, Gordy received a check for a total of $3.19 from the company. Berry framed the check as a joke but it became the seed of a very important idea. It made Gordy realize the importance of control, and as a result, he borrowed some money from his family and started his own small record company called Tamla. 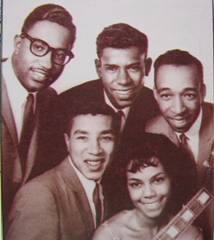 1959 was an important year for several reasons. First of all, Smokey Robinson and Claudette Rogers became man and wife. It was also the year the Miracles reached the pop charts for the first time with their doo-wop ballad “Bad Girl”. Because Tamla was still a fledgling company, the song was licensed and distributed on the Chess label.

The record’s success, however, convinced Gordy to expand his record company so that he would now control both the production and distribution of its own recordings. This decision would, in a few short years, enable Motown to become the most successful black-owned record company in history.

Another important ingredient to the Miracles was the addition of guitarist Marv Tarplin as an honorary member. Marv would play live with the group and become Smokey’s most important musical collaborator for the next thirty years. 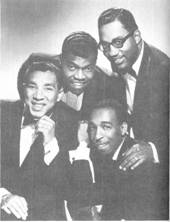 “Shop Around” was the song that established both the Miracles and Motown nationally when it reached # 1 on the R&B charts and # 2 on the pop charts in 1961. By this time Berry Gordy had bought a two-story house on West Grand Boulevard and put lettering across the front spelling out "HITSVILLE USA". He established Motown’s headquarters downstairs and had the garage set up as the the label’s recording studio.

There were two different editions of “Shop Around”. The original single version, a little slower and more blues-influenced, had already been released in Detroit when Gordy called the Miracles back to the studio in the middle of the night to re-record the song. They speeded up the tempo and simplified the rhythm on the second version of “Shop Around” resulting in the group’s first major hit when it was released nationally.

Lead singer Smokey Robinson became Motown’s first big star, but the Miracles could not follow-up on the success of “Shop Around” in 1961 as their next three singles, “Ain’t It Baby”, “Mighty Good Lovin’”, and “Everybody’s Gotta Pay Some Dues”, were R&B hits but failed to reach the Top 40.

Smokey began working with Mary Wells as her songwriter and producer in 1962. He enjoyed writing for her voice and came up with a calypso-flavored sound that produced three consecutive Top Ten singles: “The One Who Really Loves You”, “You Beat Me To The Punch” and “Two Lovers”. They helped make Mary Motown’s first big female star. Meanwhile, with Pete Moore in the Army, the group had its biggest hits in over a year with 1962’s “What’s So Good About Goodbye” and “I’ll Try Something New”.

By 1963, Pete Moore had returned from the service, but Claudette was working less, primarily as a result of two miscarriages. She would no longer perform regularly with the Miracles, but would continue to record with the group. “You Really Got A Hold On Me” was a # 1 R&B hit for the group early in the year and also reached # 8 in the Top 40. The group then scored its second monster hit of the year with “Mickey’s Monkey”.

Motown literally exploded across America in 1964. The Miracles had Top 40 hits that year with “I Gotta Dance To Keep From Crying”, “I Like It Like That”, and “That’s What Love Is Made Of”. In addition, Smokey wrote and produced “The Way You Do The Things You Do” and I’ll Be In Trouble” for the Temptations and ‘What’s So Easy For Two Is So Hard For One” and “My Guy” for Mary Wells.

Smokey was really on a roll in 1965 as he wrote and produced four Top 20 singles for the Temptations, including their first # 1 single, “My Girl”. He also wrote and produced the Top Ten hits “Ain’t That Peculiar” and “I’ll Be Doggone” for Marvin Gaye. The Miracles put out an incredible string of classic singles that year starting with “Ooo Baby Baby”, followed by “The Tracks Of My Tears”, “My Girl Has Gone”, and finally the dance floor hit “Going To A Go-Go”. 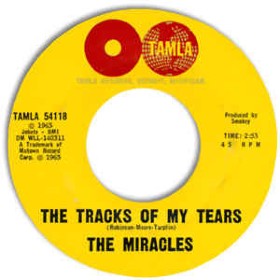 The same year saw the group billed as Smokey Robinson & The Miracles for the first time on the “Going To A Go-Go” album as Berry Gordy decided that featuring the main Miracle would boost sales. The album became the first by the Miracles to reach the Top Ten on Billboard’s album charts. Starting with 1967’s “The Love I Saw In You Was Just A Mirage” all of the group’s singles were issued as by Smokey Robinson & The Miracles. The group didn’t miss a beat with their name change as they continued to churn out smashes like “More Love”, “I Second That Emotion”, “If You Can Want”, “Special Occasion” and “Baby, Baby Don’t Cry” as the 60’s drew to a close.

With all the hits that Smokey had written and produced, the group had never had a # 1 hit on the pop charts until 1970. Smokey had co-written “Tears Of A Clown” with Stevie Wonder in 1967, and it had already been released on a Miracles’ album and even on the B-side of an earlier hit single.

The song unexpectedly became a # 1 hit in England early in 1970, and as a result was re-released in America. “Tears Of A Clown” sold over three million copies and became Smokey Robinson & the Miracles’ biggest hit ever when it topped the charts for two weeks in the fall of the year.

Smokey was happy with all the success both he and the group enjoyed, but he was tired of touring and he wanted to spend more time with Claudette and his two children who were born in 1968 and 1969. He waited until 1972, however, to announce his departure from the Miracles and the start of his solo career. Smokey moved to California the same year Motown relocated its offices from Detroit to Los Angeles. 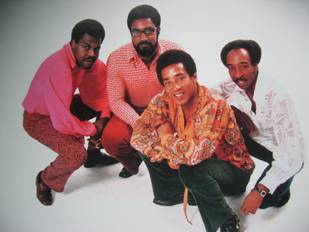 The remaining Miracles decided to stay in Detroit and replaced Smokey with Billy Griffin, who had won a long series of nationwide auditions for the position. The “new” Miracles had a hit single with “Do It Baby” in 1974. Just a little over a year later, they scored a # 1 hit with “Love Machine (Part 1)”, but it would also be the group’s final chart appearance on Billboard’s Hot 100.

The “new” Miracles left Motown and signed with Columbia in 1977. Their last appearance on the R&B charts before disbanding was with the minor hit “Mean Machine” in 1978. Billy Griffin went on to pursue a solo career and Pete Moore went into record production in Detroit.

The Miracles were restarted by Bobby Rogers in the 80’s and have went through a number of personnel changes as they continue to perform on the “oldies” circuit. Sadly, Ron White died of leukemia in 1995. Claudette Robinson, who divorced Smokey in the 1980’s, began performing again with the group but has since left.

The Miracles (Smokey Robinson &) were voted into Michigan Rock and Roll Legends Hall of Fame in 2006. In 2008, the Miracles' hit "The Tracks Of My Tears" was voted in as one of Michigan's Legendary Songs. "You've Really Got A Hold On Me" was added in 2012 and "The Tears Of A Clown" in 2013.

Although Smokey Robinson was inducted into the Rock and Roll Hall of Fame in 1987, The Miracles as a group were not honored. The Miracles were Motown's first important artists.  The group had 46 hits on Billboard's Hot 100 and 48 on the R&B chart, with and without Smokey Robinson.  The fact that The Miracles, on their own, had been excluded from the Rock Hall was one of the institution's most glaring oversights.  The situation was rectified somewhat in 2012 when a special committee identified them as a "backing group" that should be recognized along with the original lead singer.  Although that definition seemed a better fit for The Comets and The Midnighters, it was gratifying to finally see The Miracles in the Rock and Roll Hall of Fame.

On September 30, 2011, Marv Tarplin passed away in Las Vegas.  The longtime guitarist for both the Miracles and Smokey Robinson co-wrote "The Tracks Of My Tears" and many other hit songs.

In June of 2012, The Miracles' hit single "You've Really Got A Hold On Me" was voted a Legendary Michigan Song. "The Tears Of A Clown" was likewise honored in 2013.

Video:  Watch Smokey Robinson & The Miracles perform "The Tears Of A Clown" at https://www.youtube.com/watch?v=NW3b3oYk5b0

“Smokey Robinson + The Miracles: The Ultimate Collection”: Motown CD. If you are looking for a single disc that has all the Top Ten singles, this 25 song collection is a great bargain.