The Supremes were the most successful girl group of all time and one of the biggest selling artists of the 1960’s.  They charted thirty-three songs during that decade, of which twelve were # 1 hits.  The Supremes were Motown’s most glamorous and important act.  At the height of the civil rights movement, they were looked upon as examples of African-American achievement and fashion.  Lead singer Diana Ross became the first black female sex symbol in popular music.

The Supremes’ regular television appearances and sold-out concerts made them the kind of crossover success that Berry Gordy Jr. had always hoped for.  The Supremes’ journey to become “America’s sweethearts”, however, was neither easy nor without tragedy 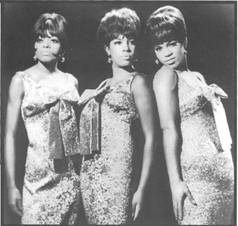 Motown had been one of the early leaders in the girl group sound with Top Ten hits by the Marvelettes, Mary Wells, and Martha & The Vandellas.  Inspired by the Drifters, the Shirelles, and Frankie Lymon and The Teenagers; Diana Ross, Mary Wilson, and Florence Ballard met and started singing together at the Brewster Projects in their hometown of Detroit.  While still in junior high school, the girls became friends with future Temptations Eddie Kendricks and Paul Williams, who were in a male trio called the Primes. 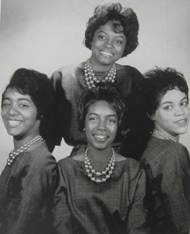 It was the fashion of the day in the Motor City for male groups to have a “sister” group who would perform with them.  The girls, along with Betty McGlown, were dubbed the Primettes and appeared locally with the Primes.  The Primettes became known in the Detroit area singing for free at sock hops hosted by radio disc jockeys like Ernie Durham, Larry Dean, and Robin Seymour.

The girls, along with their guitarist Marv Tarplin, met Smokey Robinson who arranged an audition for them at Motown.  Smokey ended up hiring Marv Tarplin to play with the Miracles while the Primettes auditioned for Berry Gordy Jr.  He felt the girls were too young to sign and told them that they should come back when they had finished school.

Gordy did allow them to hang around at the Hitsville U.S.A. studio after school, however, and they were able to meet the performers and musicians at Motown. The Primettes would even contribute occasional background vocals and hand claps on some of the records produced there.

Shortly after Betty McGlown decided to leave the group to get married, the Primettes recorded their first single, “Tears Of Sorrow/Pretty Baby”, for a small Detroit independent called Lu Pine.  The label became involved in a payola investigation shortly thereafter with the result that the Primettes’ debut received only a limited release.  Barbara Martin then joined the group.

Gordy eventually signed the girls to Motown in 1961, but he wanted them to change their name.  Florence Ballard picked ‘Supremes’ as the quartet's new name, and they released their first single, “I Want A Guy”, later in the year.  When Barbara Martin announced that she was leaving the group because she was pregnant and planned to marry, Diana, Flo, and Mary decided to carry on as a trio.

Despite having their early singles such as “Your Heart Belongs To Me”, “Let Me Go The Right Way”, and “A Breath Taking Guy”, written by talents such as Smokey Robinson, Berry Gordy Jr., and Eddie Holland, none of the Supremes’ records were making much of mark on the charts. 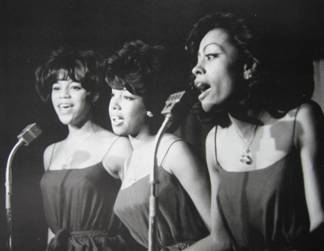 Florence Ballard, Mary Wilson, Diana RossThis changed when the Supremes were given to the writing and production team of brothers Brian and Eddie Holland and their friend Lamont Dozier.

Holland, Dozier, and Holland’s first effort for the Supremes was called “When The Lovelight Starts Shining Through His Eyes”, and it gave the girls their first Top 40 hit in early 1964.  But their second single together, “Run, Run, Run”, barely charted.

It wasn’t until the third single with the Supremes that the H-D-H team hit on the seductive formula that really took advantage of Diana Ross’ distinctive voice.  The song was called “Where Did Our Love Go”.  The Marvelettes had already rejected it for their next single.  Even the Supremes didn’t originally like the song with its simple clip-clop beat.  Despite their reservations, however, it became the Supremes’ first # 1 hit and established a recognizable style for the group.  “Where Did Our Love Go” features Ross’ great lead vocal which somehow manages to be sweet, coy, pleading, and sexy all at the same time, along with some very stylish backing vocals from Florence and Mary.

Incredibly, the Supremes followed it up with four more consecutive # 1 hits:  “Baby Love”, “Come See About Me”, “Stop! In The Name Of Love”, and “Back In My Arms Again”.  No other girl group had ever had more than two # 1 hits in their entire career.  The only artist that was charting more hits than the Supremes during 1964 and 1965 was the Beatles.  The girls appeared on the popular television shows of the day:  The Ed Sullivan Show, Hollywood Palace, Shindig, and Hullabaloo. The Supremes also made their film debut in 1965’s Beach Ball. 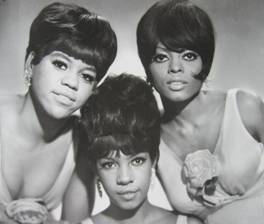 Diana, Mary and Flo’s string of # 1 singles ended with “Nothing But Heartaches” which only reached # 11 in the summer of 1965.  Their follow-up, “I Hear A Symphony”, put them back at # 1 three months later.

The girls started 1966 with two consecutive Top Ten singles, “My World Is Empty Without You” and “Love Is Like An Itching In My Heart”.

The Supremes then demonstrated that they were one of the most important artists in popular music when they put together another string of four consecutive # 1 singles with:  “You Can’t Hurry Love”, “You Keep Me Hanging On”, “Love Is Here And Now You’re Gone” and “The Happening”.  The latter was the title song from the 1967 movie starring Anthony Quinn. 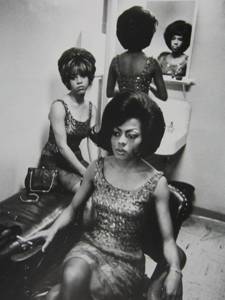 Although everyone in the trio insisted they were a group of equals to the press, there was little doubt that the public viewed Diana Ross as the star.  Ross had established herself as the first international black sex symbol, but offstage she was very driven and her abrasive personality often caused conflicts.  This was further complicated by a romantic relationship between Ross and Berry Gordy Jr. and his subsequent decision to change the name of the group to Diana Ross and The Supremes in 1967.

Meanwhile, as the hits continued, the Supremes were starting to unravel.  Florence Ballard had developed a drinking problem that resulted in unpredictable mood swings, noticeable weight gain, and her missing several concert dates.  All of these things along with Ballard’s resentment towards what she perceived as Ross’ special treatment seemed to threaten the group’s future.

Under their new moniker, Diana Ross and The Supremes, they had a # 2 hit with “Reflections” in the summer of 1967.  Florence was asked to leave the Supremes around this time.  Ballard was given a large sum of money as a settlement in early 1968, but within a few years most of it had been lost to a dishonest attorney.  Florence was also suffering from a variety of health problems and an unhappy marriage. 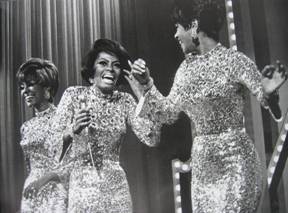 Cindy Birdsong replaced Ballard, but their hit-making team of Holland-Dozier-Holland had also left Motown at this time over monetary disagreements.  Diana Ross and The Supremes had hits with “In And Out Of Love” and “Forever Came Today”, which were the last H-D-H songs written for them.  Ross had recorded the latter song without any of the other Supremes, a practice that would continue on some future recordings.

They were still America’s favorite black entertainers, however, and that popularity was used to endorse Hubert Humphrey for president at New York’s Waldorf Astoria in the summer of 1968.  In the fall, Diana Ross and The Supremes previewed their new # 1 single, “Love Child”, on The Ed Sullivan Show.

The group began 1969 with a hit duet with the Temptations, “I’m Gonna Make You Love Me”, that was taken from Diana Ross and The Supremes’ NBC special TCB (Takin’Care Of Business).   “I’m Livin’ In Shame” was released six weeks later and peaked at # 10.

None of the next three singles that the group released were substantial hits as rumors swirled that Diana Ross was leaving the Supremes.  Ross made her farewell television appearance with the Supremes in December of 1969 performing the last # 1 hit the group would record, “Someday We’ll Be Together” and left the group for good shortly thereafter. 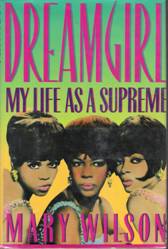 Diana Ross went on to a very successful solo recording career that has included six # 1 hit singles. Ross has also starred in three major films including Motown’s first movie production, Lady Sings The Blues.  She earned an Oscar nomination for her portrayal of singer Billie Holiday in the film.

Mary Wilson continued on as a member of the Supremes.  The group, with a variety of new members, charted fourteen more hits in the 1970’s including the Top Ten singles, “Up The Ladder To The Roof” and “Stoned Love”.

Wilson disbanded the group in 1977 and lost the rights to use the name ‘Supremes’ the following year.  Mary still performs as a solo artist and wrote a best-selling autobiography, Dreamgirl: My Life As A Supreme in 1986.

The story of Florence Ballard is a sad one.  Ballard signed with ABC Records as a solo artist in 1968.  Her two singles recorded for the label, however, failed to chart. Florence also recorded an album for ABC that was not released.

Ballard was suffering from depression, high blood pressure, and was separated from her husband when she was reduced to receiving aid for dependent children in Detroit.  For all intents and purposes Ballard had given up singing in her late twenties, and just nine years after leaving the Supremes she died of cardiac arrest at the age of 32.

The Supremes were inducted into the Rock and Roll Hall of Fame in 1988, but Diana Ross declined to attend.  Berry Gordy Jr. was inducted that same year as a non-performer.

Holland-Dozier-Holland, the songwriting and production team that helped the Supremes reach the top, were also inducted in the non-performer category in 1990.

Video:  Watch the Supremes performing "Baby Love" on Top Of The Pops in 1964 https://www.youtube.com/watch?v=x4iIXC5sk8M

“The Best Of Diana Ross & The Supremes”, Motown 2 CD Set.  This is a terrific 52 song collection that covers all the essential songs with Diana Ross as well as the important songs that the group recorded after Ross left.

“Diana Ross & The Supremes: The Ultimate Collection. Motown CD.  This great 25 song collection focuses just on the hits that Diana Ross performed with the group.

Call Her Miss Ross by J. Randy Taraborrelli.  Birch Lane Press.  Based on over 400 interviews, this is a vivid and unflinching biographical portrait of Motown’s most famous diva, Diana Ross.

Dreamgirl: My Life As A Supreme by Mary Wilson.  St. Martin’s Press.   This is a highly entertaining autobiography that covers Mary’s life from her childhood through her career in The Supremes.