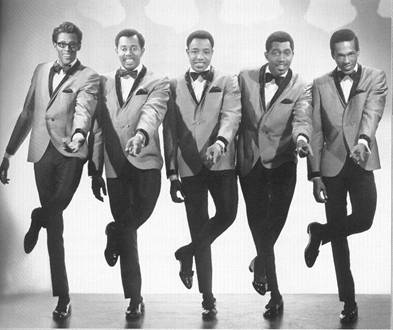 “My Girl” is one of the most recognizable and popular of all the hits of the 1960’s. Written by Smokey Robinson and featuring the famous opening notes by bassist James Jamerson of Motown’s house band the Funk Brothers, the song was an answer to Mary Wells’ 1964 hit, “My Guy”. It was the first # 1 hit for the Temptations, the longest lasting and most successful of all the male Motown vocal groups.

In the 1950’s, Detroit was a hotbed of vocal groups inspired by early doo-wop successes like the Moonglows and the Flamingos, and the gospel sounds of Sam Cooke & The Soul Stirrers and the Swan Silvertones. The Temptations were a combination of two Detroit-area vocal groups: Otis Williams & The Distants and the Primes.

Otis Williams & The Distants were the first of the two to taste success when their rocking single “Come On” was a hit on the local Northern label and then picked up for national distribution by Warwick. When two of the Distants later decided to quit the group, remaining members Otis Williams, Al Bryant, and Melvin Franklin began looking for singers.

Fortunately, Otis got a phone call from Eddie Kendricks. Kendricks said that one of the Primes had just left his trio after the group had failed to sign a recording contract, leaving just himself and Paul Williams. Since the groups had performed on the same bills in Detroit and knew each other well, Otis invited the two remaining Primes to join his group in an exciting new combination.

Signed to Motown in 1961 and renamed the Temptations, the group’s first two singles, “Oh, Mother Of Mine” and “Check Yourself” were released on Motown’s Miracle label. Confusion between the label name and Smokey Robinson’s group, the Miracles, caused the label name to be changed to Gordy.

The Temptations’ 1962 single “Dream Come True” was the first release on the new label and the group’s first showing on the R&B charts. Subsequent singles in 1962 and 1963, however, failed to make a dent on either the R&B or Top 40 charts.

In December of 1963, Al Bryant was fired from the Temptations because of an escalating drinking problem and was replaced by David Ruffin. Ruffin was an experienced singer who got his start in the gospel field performing with the Dixie Hummingbirds and the Staple Singers. Ruffin had also released two Detroit area singles, “I’m In Love” and “Action Speaks Louder Than Words”, on the Anna and Checkmate labels respectively. 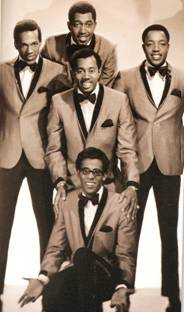 The addition of Ruffin, along with Eddie Kendricks, gave the Temptations two strong lead singers with completely different vocal styles. The new lineup clicked immediately as their first single, “The Way You Do The Things You Do”, was a big hit at the same time that Beatlemania was raging across the United States. The Temptations had a precise and synchronized set of dance floor moves that seemed to perfectly match the song that Smokey Robinson had written and produced for them.

The Temptations recorded two more Top 40 hits during Motown’s break-out year of 1964. Smokey Robinson wrote and produced “I’ll Be In Trouble” while a young Norman Whitfield produced “Girl (Why You Wanna Make Me Blue)”.

Eddie Kendricks had handled the lead vocals on the the Temptations’ first three hits, but the lead vocal on their most memorable song, “My Girl”, was by David Ruffin. Smokey Robinson wrote the song with Ruffin’s vocal style in mind and “My Girl” reached # 1 on both the Top 40 and R&B charts early in 1965.

Smokey Robinson continued to make David Ruffin the centerpiece of the group’s next three hit singles, “It’s Growing”, “Since I Lost My Baby”, and “My Baby”. It wasn’t until 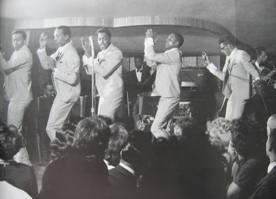 Temptations on stage1966’s “Get Ready” that Eddie Kendricks had the lead chores again.

Although “Get Ready” reached # 1 on the R&B charts, it peaked at only # 29 on the pop charts. This provided an opportunity for Norman Whitfield to write and produce the Temptations’ next single.

David Ruffin was a very talented singer and a dynamic force onstage, but he was also very egotistical and often tried the patience of the rest of the group. Because of his star power, there were even hints that he wanted top billing as David Ruffin & The Temptations.

The hits kept coming in 1967 with “All I Need”, “You’re My Everything”, and “(Loneliness Made Me Realize) It’s You That I Need”. Although the Temptations were enjoying great fame and fortune, there was serious trouble brewing in the group. Ruffin missed performances, showed up late, and demanded more and more attention. 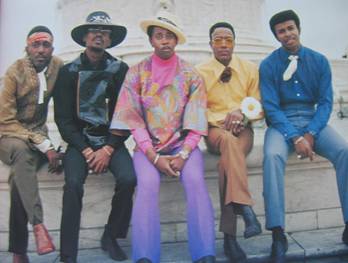 Despite two more hit singles, “I Wish It Would Rain” and “I Could Never Love Another (After Loving You)” with David singing lead, Ruffin's increased drug use  became yet another issue. Things came to head during the summer as angry confrontations within the group grew more common.

Finally in July of 1968, David Ruffin left the Temptations to record for Motown as a solo artist. He was replaced by fellow Motown singer Dennis Edwards who had a similar vocal sound and had been a member of the Contours.

The Temptations hardly missed a beat as they scored both a smash hit and Motown’s first Grammy with “Cloud Nine”. They also shared a # 2 hit duet with Diana Ross & The Supremes, on “I’m Gonna Make You Love Me”.

The Temptations and Norman Whitfield continued on their new path of ‘psychedelic soul’ in 1969 with “Run Away Child, Running Wild”, “Don’t Let The Joneses Get You Down”, and their second # 1 Top 40 single, “I Can’t Get Next To You”. The string of powerful hit singles continued into 1970 with “Psychedelic Shack” and “Ball Of Confusion (That’s What The World Is Today)”

1971 turned out to be another pivotal year in the group’s history. After singing the lead on the Temptations’ third # 1 hit, “Just My Imagination (Running Away With Me)”, Eddie Kendricks left the group to go solo.

Original member Paul Williams also left the group but for different reasons. Paul was in such poor health due to alcohol abuse that his 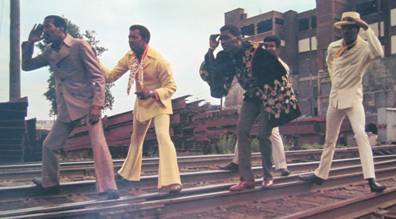 parts during live performances had to be sung by another singer behind the stage curtain. Two years after his official departure from the Temptations, Paul was found dead in his parked car just blocks from Motown, the result of a self-inflicted gunshot wound.

The Temptations continued on through numerous personnel changes. They won three Grammys in 1973 for their last # 1 hit, “Papa Was A Rollin’ Stone” shortly after Berry Gordy had put the finishing touches on his move of Motown from Detroit to Los Angeles.

Their follow-up, “Masterpiece” would be the Temptations’ last Top 10 single on the pop charts. Now recording and performing with only two original members, Otis Williams and Melvin Franklin, the Temptations were still a force on the R&B charts as they scored # 1 hits in 1974 with “Let Your Hair Down” and in 1975 with “Happy People” and “Shakey Ground”.

Dennis Edwards left the group and returned twice before quitting for good and forming his own Dennis Edwards' Temptations Review. After Melvin Franklin died in 1995, Otis Williams carried on performing as the only original member of the Temptations.

David Ruffin died of a drug overdose in 1991 after a somewhat disappointing solo career that produced Top 10 pop hits in 1969 with “My Whole World Ended (The Moment You Left Me)” and 1976’s “Walk Away From Love”.

The Temptations were inducted into the Rock and Roll Hall of Fame in 1989.

They were voted into Michigan Rock and Roll Legends  Hall of Fame in 2005. The Temptations' recording of "My Girl" was voted into the Top Ten Legendary Michigan Songs in the spring of 2007.  "Ain't Too Proud To Beg" was honored in 2013 and "Papa Was A Rollin' Stone" in 2015.

“The Temptations Anthology” Motown 2 CD set. This is the package if you want just the hits. This excellent set has 46 great tunes.

“The Temptations Sing Smokey” Motown CD. Although not known as an album group, this is a good concept LP that highlights their collaborations with Smokey Robinson.

"The Temptations: Get Ready. Definitive Performances 1965-1972". Hip-O,Motown DVD. This is a great collection of 16 classic full-length television performances by Motown's greatest vocal group. It also features commentary from Otis Williams, the only surviving member of the original Temptations.