By the early 1950's, Detroit had emerged as a center for rhythm and blues music and it produced several of the genre's important artists. Hank Ballard was born in Detroit in 1927, but after the death of both of his parents at the age of 7, he was sent to Alabama to live with relatives. While there, he became influenced by both gospel and country music. He later claimed that cowboy singer Gene Autry was one of his early musical heroes.

Ballard ran away from his relatives’ home in Alabama at 15 and returned to Detroit. He got a job at the Ford plant and would often sing while working on the assembly line. A member of a Detroit vocal group called The Royals heard him sing and invited him to a talent contest held at the Paradise Theater in Detroit’s black entertainment district. Hank impressed the group at the contest, and they invited him to join the Royals in 1953. 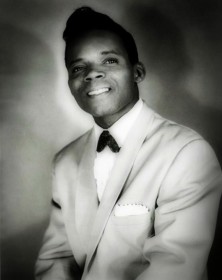 The Royals, who sang mostly ballads, had been discovered by bandleader and talent scout Johnny Otis who signed them to Federal Records. In 1952, they recorded a Johnny Otis composition called “Every Beat Of My Heart” but it failed to sell. In 1961, the song would be covered by Gladys Knight & The Pips for their first #1 R&B hit. Ballard convinced the group to record more upbeat material, and he wrote “Get It” which became the group’s first Top Ten R&B hit in 1953.

In 1954, the group became national sensations with the release of “Work With Me Annie”. To avoid confusion with another popular group called the Five Royales, they changed their name to The Midnighters. Despite the fact that “Work With Me Annie” was banned on some radio stations because of its risqué lyrics (“work” was slang for sex in the black community) it spent 7 weeks at # 1 on the Billboard R&B chart and even crossed over to the Top 40 on the Pop chart. Listen to "Work With Me Annie" https://www.youtube.com/watch?v=5Nh2H3IdN98

The Midnighters followed-up their hit with a number of “Annie” answer songs including “Annie Had A Baby”, “Sexy Ways”, and “Annie’s Aunt Fanny”. All became major R&B hits but got little pop radio airplay because of the group’s risqué reputation. 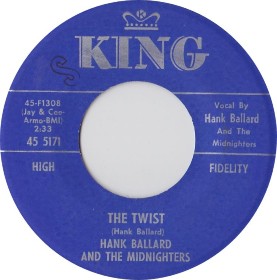 By 1959, the group was being billed as Hank Ballard & The Midnighters. The first release under their new name was a ballad called “Teardrops On Your Letter”, backed with a dance number titled “The Twist”. Ballard wanted “The Twist” released as the A-side but the King label chose “Teardrops On Your Letter” as the side designated for radio play. The strategy appeared to work as it became a # 4 R&B hit and reached # 87 on the Hot 100 - the group’s first appearance there since “Work With Me Annie” in 1954.

“The Twist” flipside was also a minor R&B hit, and the song became very popular at dances around Philadelphia. “The Twist” was brought to the attention of Dick Clark and he suggested that Chubby Checker make an almost exact copy of the record for the Cameo Parkway label. Clark promoted the song heavily on American Bandstand, and Checker’s version was a monster hit in 1960. The record kicked off the biggest rock and roll dance craze in history. Checker’s version of “The Twist” is also the only single to hit # 1 on the Billboard Hot 100 in two different years when it reached # 1 again in 1962.

Ballard’s label re-released his original version of “The Twist” and it became a Top 40 hit on the Hot 100 in 1960.This led to a string of Pop and R&B hits for Hank Ballard & The Midnighters in 1960 and 1961 including “Finger Poppin’ Time”, “Let’s Go, Let’s Go, “Let’s Go”, “The Hootchi Coochi Coo”, and “The Switch-A-Roo”. Listen to Hank Ballard and The Midnighters original version of "The Twist" https://www.youtube.com/watch?v=ROtNE-Shi2E 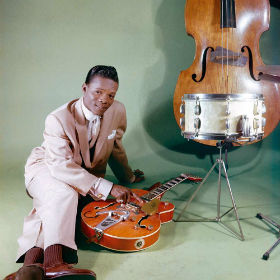 Hank Ballard continued recording through the end of the 1970's. He died of throat cancer in Los Angeles in 2003. Even though Chubby Checker had the bigger hit and is most associated with “The Twist”, Hank Ballard was the one inducted into the Rock and Roll Hall of Fame in 1990. Hank and The Midnighters were inducted into the Michigan Rock and Roll Legends Hall of Fame in 2010, and “Work With Me Annie” and their original version of “The Twist” have both been voted Legendary Michigan Songs.

Primarily because of Alan Freed’s influential radio shows, the term rock and roll was being used to encompass other forms of black music. This included vocal harmony group recordings in the style that later became known as doo wop. Early recordings in this style such as “Gee” by The Crows and “Earth Angel” by The Penguins became huge commercial successes. Because many of the early doo wop groups were black, they were most often on small independent record companies, including Fortune Records in Detroit.

Fortune Records was started in the late 1940s by Jack Brown, and his wife Devora, a poet and aspiring songwriter. The business had a record store in the front of the building and a primitive recording studio in the rear. All of the label’s early releases were by hillbilly/country artists like the York Brothers, the Davis Sisters, and the husband and wife duo of Earl & Joyce Songer. These were records that appealed to the many white southerners who had moved north to work in automobile-related jobs. 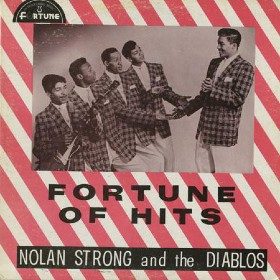 Jack and Devora Brown knew nothing about black records until a young man named Nolan Strong came in to inquire about making a demo. He was a member of The Diablos, a vocal group formed at nearby Detroit Central High School. The Browns were fascinated by Strong’s high tenor voice and signed the group to Fortune Records.

Nolan Strong had been born in Alabama and moved to Detroit as a young boy when his family came North looking for work. The Diablos were inspired by the Ink Spots and Clyde McPhatter, and their second single, a haunting ballad called “The Wind”, was a big R&B hit in Detroit, Chicago, Cleveland, and New York. "The Wind" is considered an early doo wop classic; but Fortune had very limited distribution for its records and this prevented Nolan Strong & The Diablos from having a national hit. The group recorded several more singles and toured successfully until Strong was drafted into the Army in 1956. Listen to "The Wind" https://www.youtube.com/watch?v=bIVKaayaNaY

Strong was honorably discharged in 1958, but he had developed a fondness for pills and alcohol in the Army and nothing was the same after he returned. Despite often missing recording dates and not showing up for gigs, the Browns loved Nolan. Perhaps because they were so forgiving, he loved Fortune Records as well, staying at the label for his entire career despite some lucrative offers from other labels, including Motown. Nolan Strong was a major influence on a young Smokey Robinson who also had a high tenor voice.

The group’s last good chance at a national hit came when Devora Brown wrote a song especially for Nolan called “Mind Over Matter”. Despite being recorded with the Diablos, the record was released as a Nolan Strong solo record. It was such a big hit in Detroit that Berry Gordy attempted to stop the song’s momentum by having The Temptations record a cover version under the name “The Pirates”. Tt was Fortune’s lack of distribution, however, that was most responsible for "Mind Over Matter" not becoming a national hit. Listen to "Mind Over Matter" https://www.youtube.com/watch?v=JLy9CQstuxg

Nolan Strong died in 1977. He is buried in the same cemetery in Detroit as Jackie Wilson, and the markers of the two singers are about 75 yards apart. Nolan Strong & The Diablos were inducted into the Doo-Wop Hall of Fame in 2008 and the Michigan Rock and Roll Legends Hall of Fame in 2019. In addition, the group’s recordings of both “The Wind” and “Mind Over Matter” have been voted Legendary Michigan Songs.

The second important black artist to record for Fortune Records was Andre Williams. He was born in Alabama in 1936, but he left home on his own for Detroit at the age of sixteen. After winning an amateur talent contest eight weeks in a row at the Warfield Theater, Williams was offered a contract by Fortune Records to replace a member of the Five Dollars who had been drafted.

Knowing he wasn’t blessed with a great singing voice, Williams developed the unique gimmick of talking in rhythm rather than singing. He recorded a single called “Bacon Fat” in this style, and it became a big local hit after it was played heavily by black Detroit DJ “Frantic” Ernie Durham. The Browns leased the song to Epic Records and it made Billboard’s R&B chart in 1956. Listen to "Bacon Fat" https://www.youtube.com/watch?v=25TB78umu7U 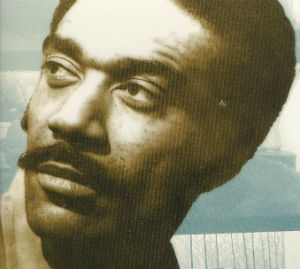 His follow-up, “Jail Bait”, was done in the same style. It was a cautionary tale of the danger of getting involved with underage girls. The Browns did not like sharing the profits with Epic Records, but their poor distribution probably prevented the record from charting nationally.

In the 1960s, Williams was employed at Motown. He wrote Little Stevie Wonder’s debut single and worked with The Contours and Edwin Starr. He also wrote the hits “Shake A Tail Feather” for James and Bobby Purify and “Twine Time” for Alvin Cash & The Crawlers. In the 1970s, he composed songs for Parliament-Funkadelic and did production work for Ike Turner.

Drug addiction reduced Williams to poverty in the 1980's, and at one time he was homeless on the streets of Chicago. He made a remarkable comeback in the 1990's, issuing a number of albums on the Bloodshot label. Williams was also the subject of a 2007 documentary of his life and career called Agile, Mobile, Hostile: A Year With Andre Williams. He was inducted into the Michigan Rock and Roll Legends Hall of Fame in 2012. Andre Williams passed away in March of 2019 at the age of 82. Watch a cool live performance of "Jail Bait" https://www.youtube.com/watch?v=hjpNpRPJqhs