Instrumental rock was most popular during rock and roll’s first decade. Bill Doggett, Santo & Johnny, Bill Justis, Duane Eddy, Link Wray, The Virtues, Cozy Cole, and Sandy Nelson were just some of the artists who had hit records during the 1950's; and “Tequila” by The Champs spent five weeks at # 1 in 1957. The trend continued into the next decade with top hits by Booker T. & The MGs, The Ventures, The Marketts, The Rockin’ Rebels, Lonnie Mack, and The Tornadoes. The 1960s also saw a batch of surf instrumental hits by the likes of Dick Dale and The Del-Tones, The Surfaris, and The Chantay’s.

Michigan artists made major contributions to the instrumental genre as well. Some of these recordings made the national charts while many others were only local hits released on tiny independent labels.

After Harry Balk parted ways with Little Willie John, he partnered with Irv Micahnik to form a booking and management company called Artists Inc. Their first successful client was an instrumental band from Toledo, Ohio, called The Orbits. Johnny Paris’ wailing saxophone over a rocking organ beat gave the band its signature sound. Balk and Micahnik signed them to a long-term contract and renamed the band Johnny & The Hurricanes. 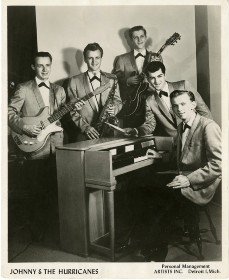 Balk recorded the band’s first record, “Crossfire”, for $60 in a vacant movie theater in Dearborn, Michigan, to provide echo. After Balk and Micahnik shopped the record unsuccessfully in New York, they decided to put it out themselves. They pressed 1,000 copies on their own Twirl label, and after it became a local hit, Warwick Records leased it for national distribution and it reached # 23 on the Hot 100 in 1959. Listen to "Crossfire" https://www.youtube.com/watch?v=O0-Bw-xKg3g

Micahnik and Balk then formed EmBee Productions and brought Johnny and The Hurricanes back in the studio. They came up with the idea of having the band record revved up versions of traditional songs with Balk and Micahnik taking the songwriting credits under the pseudonyms T. King and I. Mack. The first of these was a rocking version of the old western song “Red River Valley”, renamed “Red River Rock”. It hit # 5 on the Hot 100 and # 3 in England. “Red River Rock” sold over a million copies and made stars of Johnny & The Hurricanes.

They continued to use the formula of doing rocked up versions of old tunes but with steadily diminishing results. Johnny and The Hurricane scored Top 40 hits with “Reveille Rock” in 1959 and “Beatnik Fly” in 1960. By 1961, however, the hits had dried up for the band. Johnny Paris continued to tour with an ever-changing lineup of Hurricanes in both the U.S. and Europe until 2005. Paris died in Ann Arbor in 2006 at the age of 66. 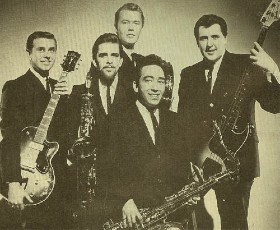 George Katsakis formed an instrumental band called The Paragons in Dearborn in 1957. After they appeared at the Dance Ranch, Jack Scott asked Katsakis to play sax on his recording session, and Katsakis played saxophone on Scott’s hit recordings of “My True Love” and “Leroy”. Shortly thereafter, the Paragons recorded a demo of an original instrumental called “Poor Boy” at a small studio in Detroit operated by Stu Gorelick.

Gorelick loved the song, took the demo to New York, and got the band signed to Jubilee Records. But a problem came up - there was already a recording group called The Paragons, so Gorelick wrote ‘Royaltones’ on the contract without any input from the band members.

Any unhappiness with their new name faded when “Poor Boy” started getting airplay on radio stations across the country. As a result, The Royaltones appeared on Dick Clark’s Beechnut Show and some big package shows at the Brooklyn Paramount Theater in New York City. Listen to "Poor Boy" https://www.youtube.com/watch?v=UhsyD4Bg3Ls 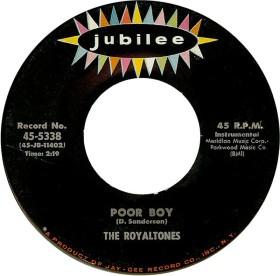 The Royaltones were local heroes in Detroit; but they didn’t see any money from their hit that reached # 17 on the Hot 100 in 1958. The band got into a legal hassle with Gorelick, and Jubilee, not wanting to get involved in the dispute, dropped the Royaltones from the label.

The band signed with Goldisc Records but did not have another another charting instrumental until “Flamingo Express” reached # 82 on the Hot 100 in 1961. The group went on to back Del Shannon on several of his 60's hits, and its later lineup included future Funk Brothers Bob Babbitt and Dennis Coffey. “Flamingo Express” was voted a Legendary Michigan Song in 2014.

David Clowney was born in Detroit in 1938 and attended Northwestern High School. Encouraged by his father to pursue a career in music, he studied piano for ten years and then took up the organ. Clowney made his first record in 1956 under his own name and also sang with two doo-wop groups, The Valentines and The Pearls. His first big success, however, would come by recording an instrumental. 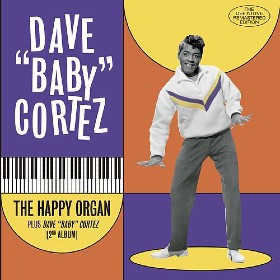 Dave “Baby” Cortez had his only other significant hit with the instrumental “Rinky Dink”. It reached # 10 on the Hot 100 on Chess Records in 1962. He returned to recording vocals in the 1970's and had a minor pop hit in 1973 with “Someone Has Taken Your Place”. Cortez is still living, and “The Happy Organ” was named a Legendary Michigan Song in 2018.

Michigan had a great number of other worthwhile instrumental recordings as well. The Atlantics were an all-white band that backed Gino Washington on his first local hit, “Out Of This World”, on Detroit’s Amon label in 1963. The Atlantics, featuring Jeff Williams’ lead guitar, also recorded instrumental tracks for the Amon label including the rocking “Heartburn” released in 1963. 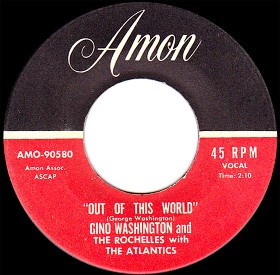 Lenny and the Thundertones, featuring the lead guitar of Lenny Drake, released a 45 on Coma Records in Detroit in 1960. “Thunder Express” showcased Drake’s hot lead guitar and sounded like it would have been right at home on a Link Wray album. The band later recorded on Detroit’s Astra label. Their rocking instrumental “Homicidal” from 1963 fit nicely into the surf rock genre. The group also recorded the cool car song called “Interstate 45” in 1963 under the pseudonym Dwight Douglas and the Jayhawks on Astra. Listen to "Thunder Express" https://www.youtube.com/watch?v=tIBZlhWI-V0

Ron Bergman and Bruce Stratton formed The Flamethrowers in Royal Oak, Michigan, in the late 1950s. The group, which featured Duane Eddy’s twangy guitar sound, signed with Clix Records in Detroit and issued their first single, “Suzette”, in 1960. After a couple of personnel changes, the band recorded two surf music instrumentals, “Intensity” and “Whippy Wow”, in late 1960. Clix was a primarily country label that dabbled in rockabilly and was unwilling to market the single. As a result, the Flamethrowers created their own Bel-Mar label to issue the 45.

The sensational lead guitar on “Goodbye Bo” was played by MRRL Hall of Fame inductee Cliff Bramlett. He also composed the instrumental homage to Bo Diddley, one of his main guitar inspirations. When the record was released on Detroit’s DoDe label in 1964, however, the tune was credited to the Royal Playboys. Bramlett’s name was not on the single because it was recorded at the Royal Playboys/Dynamics session that produced the single “Misery”, on which Bramlett also played guitar. Although it did not chart nationally, “Goodbye Bo” was a sizeable hit in Detroit, peaking at # 18 on WKNR’s Classic Top 30 Survey and reaching # 29 on CKLW’s Big 30 Survey. Listen to "Goodbye Bo" https://www.youtube.com/watch?v=4UUxBjQUFEQ 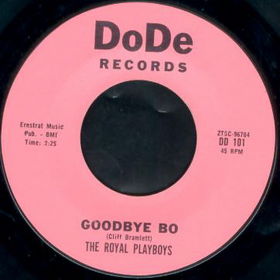 The Mysterions, not to be confused with ? and the Mysterians, recorded instrumentals for the Fascination label. “Transylvania” and “Amnesia” were both recorded in 1959 at the height of the popularity of instrumental rock songs. The single was picked up by Warwick Records for national distribution, the same label that released hit singles of Johnny & The Hurricanes, but it failed to chart.

Instrumentals were also released on independent Detroit labels more commonly associated with R&B vocals. The Vulcans released their bluesy two-sided instrumental 45, “Jambo” and “Shimmy Shuffle”, on Robert West’s Flick label in 1960. The Catalinas were another one of many Detroit-area instrumental groups in the late 50's and early 60's. The band’s sax-driven instrumental, “Destruction”, was released on Fortune Records in 1960.

Could a band wearing turbans be successful in Michigan today? Not likely, but a black instrumental group named The Egyptians pulled it off in 1960. Recording for Mah’s Records in Detroit, the combo released “The Party Stomp” backed with “Inkster Boogie”. “The Party Stomp” is a rousing R&B instrumental with a honking sax and wild guitar that was probably a late-in-the-evening party favorite. 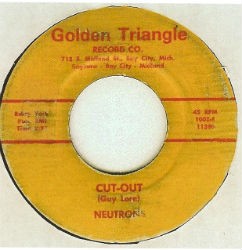 The Neutrons were the first band to record a rock and roll song at Art Schiell’s studio, located in the rear of his small residence on Raymond Street in Bay City, Michigan. Three years later, Schiell would record the # 1 hit “96 Tears” by ? and The Mysterians in that very same studio.

Neutrons’ leader, Guy Lore, was a student a T.L. Handy High School when his band recorded his rocking instrumental composition of “Cut-Out” in 1963. The 45 was released on Golden Triangle, one of the small Bay City labels owned by local record store owner Frank ‘Lucky’ Peplinski. Listen to "Cut-Out" https://www.youtube.com/watch?v=uJqoc_o5CtA

The Torquays had the misfortune of releasing their excellent two-sided 45 on Detroit’s Gypsy label in 1965, a point in time when instrumental rock had fallen out of favor. Both “Busting Point” and “The Other Side” are excellent examples of instrumental surf rock. The Torquays’ recording of “The Other Side” is the equal of “Pipeline”, the 1963 hit by The Chantay’s, but it came out two years too late.

The Thunder Rocks may be the most interesting of Detroit’s unheralded instrumental combos. Formed as teenagers, the band first played the local record hop circuit as the Black Diamonds. After working a number of hops with promoter Johnny Thunder, the band changed its name to the Thunder Rocks and made their recording debut with “Johnny Sax” on Detroit’s Roselawn Records. The instrumental has a brief spoken introduction and then lets the band convey what happened when Johnny bought his sax during the next two minutes of hard-hitting, greasy rock and roll glory. Listen to "Johnny Sax" https://www.youtube.com/watch?v=FchmsYuu_FQ 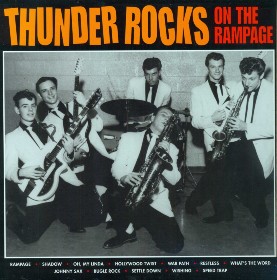 The band underwent some lineup changes in the early 1960s and started promoting their own dances and forming the Club 7-11 in 1963. The Thunder Rocks also establiished their own label, Sabre Records, to release their singles.

According to singer/writer Cub Koda, the band was significant in other ways as well. They were the first combo to utilize big amps and massive volume to get the crowd’s attention in the big halls they played, and they were the first band to incorporate choreography and wild stage moves into their presentation. This groundbreaking combination kept the Thunder Rocks in demand until the mid-1960's, when changing musical trends and the draft decimated their ranks.

Nick and The Jaguars are notable for being the first white act signed by Berry Gordy Jr. during Motown’s first year of operation. The band hailed from Pontiac and was led by drummer Nick Ferro. Prior to signing with Motown, the group released the rocking “Tough Cat” single on the Hi-Q label in 1958 with drummer Nick Ferros doing the lead vocal. 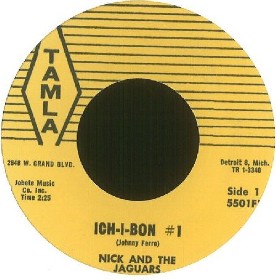 Nick’s father, Johnny Ferro, brought the group to Berry Gordy Jr. in 1959. Motown was in its first year of operation and was willing to try just about anything in order to generate hits.

Nick and The Jaguars recorded two instrumentals written by Johnny Ferro, “Ich-I-Bon # 1” and “Cool And Crazy”, that were released on the Tamla label in 1959. “Ich-I-Bon # 1” was a great guitar-led instrumental that pre-dated the surf rock instrumentals by Dick Dale and The Del-Tones by nearly three years. Listen to "Ich-I-Bon # 1" https://www.youtube.com/watch?v=_jCnfwYSPDc

Next up: Ch. 9 - "Berry Gordy Jr. and Jackie Wilson" https://michiganrockandrolllegends.com/index.php/blog/402-ch-9-jackie-wilson-and-berry-gordy